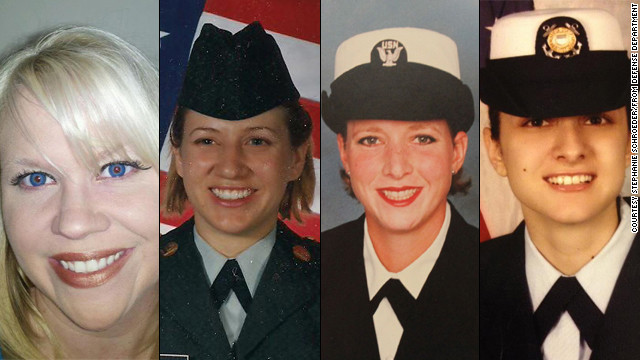 Stephanie Schroeder, Anna Moore, Jenny McClendon and Panayiota Bertzikis say they were raped and then discharged from the military.
Update Required To play the media you will need to either update your browser to a recent version or update your Flash plugin.
April 17th, 2012
01:54 PM ET

(CNN) - Stephanie Schroeder joined the U.S. Marine Corps not long after 9/11. She was a 21-year-old with an associate's degree when she reported for boot camp at Parris Island, South Carolina.

"I felt like it was the right thing to do," Schroeder recalls.

A year and a half later, the Marines diagnosed her with a personality disorder and deemed her psychologically unfit for the Corps.

Anna Moore enlisted in the Army after 9/11 and planned to make a career of it. Moore was a Patriot missile battery operator in Germany when she was diagnosed with a personality disorder and dismissed from the Army.

Jenny McClendon was serving as a sonar operator on a Navy destroyer when she received her personality disorder diagnosis.

These women joined different branches of the military but they share a common experience:

Each received the psychiatric diagnosis and military discharge after reporting a sexual assault.