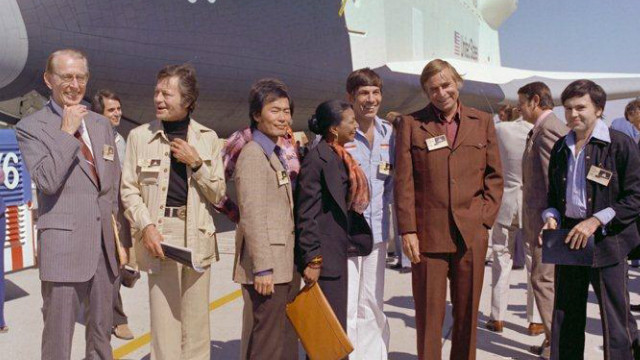 Star Trek cast members at the rollout of the Space Shuttle Enterprise in Palmdale, California on September 17, 1976 (NASA)
Update Required To play the media you will need to either update your browser to a recent version or update your Flash plugin.
April 26th, 2012
09:00 AM ET

When the Enterprise exhibit opens at theIntrepid Sea, Air and Space museum in New York, Star Trek fans will be among the first people in line to see the historic space shuttle. Trekkies – fans of the television series and movies – share a special bond with NASA’s first reusable manned space craft.  The Enterprise got its name thanks in part to their efforts.

The first space shuttle was originally supposed to be called The Constitution.  But in 1976, President Ford received letters from Star Trek fans by the tens of thousand.  The science fiction buffs saw the shuttle as the realization of their dream world. They wanted it renamed Enterprise.