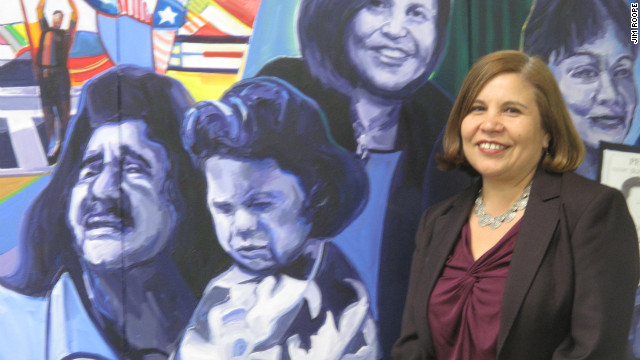 Angelica Salas, Executive Director of the Coalition for Humane Immigrant Rights Los Angeles, is preparing for immigrant rights marches and rallies on May 1. She poses next to her likeness in a mural painted on a wall in the work room of CHIRLA.
Update Required To play the media you will need to either update your browser to a recent version or update your Flash plugin.
April 27th, 2012
04:18 PM ET

(CNN) - Two groups just can’t seem to get together on a day of solidarity. For more than a decade, May 1 has been about immigration in Los Angeles. Angelica Salas, Executive Director for CHIRLA, the Coalition for Humane Immigrant Rights in Los Angeles, said for many years the US never celebrated May 1 as International Workers Day.

“[It’s] a major day of mobilization. All around the world people mobilize in mass, “Salas said. “And we’re very proud to have brought back to the United States the engagement of May 1.”

This year, however, immigration will share the day with the Occupy protesters. Salas says CHIRLA and other immigrant rights groups have tried to get together with the Occupy Movement for May Day but Michael Novick, an organizer for Occupy LA said, the two sides just couldn’t “gel.”

“We felt that Occupy itself had to plan out its particular actions on the day,” said Novick.