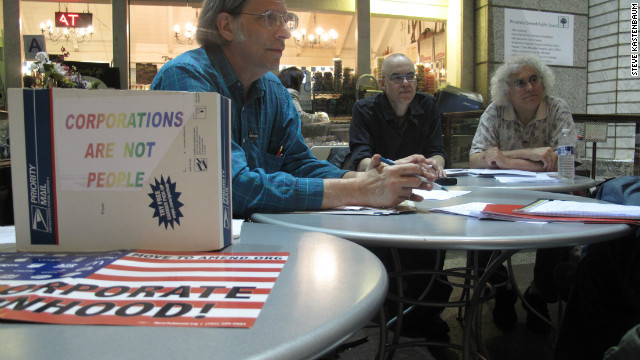 Members of the Occupy movement's Restore Democracy working group meet regularly at a public atrium on Wall Street in New York.
Update Required To play the media you will need to either update your browser to a recent version or update your Flash plugin.
April 30th, 2012
11:26 AM ET

Don’t go to work, don’t attend classes, don’t buy anything, don’t do banking, don’t do house work… that’s the call from organizers of the Occupy Movement for their general strike on May 1st, also known as International Workers Day.

It’s not clear how many people will take part in the day of action. Numerous Occupy websites point to protests and marches taking place in over 125 cities in solidarity with labor unions and immigrant groups. The bigger question for activists involved in the movement centered on economic justice and ridding politics of corporate money is where they will take Occupy beyond May 1st.

“Some of us are Anarchists. Some of us are Liberals, Progressives like me. I want to change things,” said John Steefel, a member of Occupy’s Restore Democracy working group. They meet regularly inside a public atrium on Wall Street inNew York.

Steefel and other members of his group are pushing for a constitutional amendment that would overturn several controversial Supreme Court Rulings. Citizens United opened the flood gates to corporate money in political campaigns. The Buckley case equated money with free speech.

While Steefel wants to reform government from within other protestors are calling for nothing short of a revolution. “The core of Occupy is an anti-Capitalist movement,” said Ann Larson, a member of the Occupy Student Debt group. “Most of the people who I talk to… we don’t believe that Capitalism is reformable.” Larson’s group is drawing attention to the $1 trillion dollars in student debt held across the US today.

Activists working on dozens of causes have adopted the Occupy brand. There’s Occupy Climate Change, Occupy Faith, Doctors for the 99%, Occupy Farms, The Feminist General Assembly and 99 comics for the 99 percent to name a few.

Critics see this as a diffused and confusing movement. Occupier Rick Theis said it all makes sense. “There are a lot of issues people are working on but I think that’s a good thing and I don’t think the public sees it as being muddy.” Theis said economic injustice and the influence of big business on government are still at the core of the movement. “There are a lot of interests that people have and there are a lot of changes that need to take place in the country and people realize that.”

While many causes stand beneath the umbrella of Occupy, the movement remains one without a list of demands.ColumbiaUniversityhistory professor Eric Foner says there are precedents for that in American history.

“In the 1960’s for example, after the cry of Black Power is raised and many other groups took up this same slogan. There was Red Power, the Native American movement; there was Chicano Power, the Latino movement,” said the expert on social movements in the US. “Similarly, liberation… Women’s Liberation I guess began the use of that phrase, and then spawned Gay Liberation.”

Foner said like those previous social movements, Occupy is more about changing attitudes then putting forth an agenda and setting goals. “There’s a kind of fragmentation. There are all these different modes of Occupy out there on all sorts of issues.”

That could wind up being helpful to the evolution of the Occupy movement or it could wind up leading to its downfall according to Professor Foner. “It’s not clear whether this is cumulative or actually centrifugal force and the whole thing spinning off into all sorts of different directions.”

Among this collage of ideas, two camps seem to have emerged within Occupy. There’s Ann Larson’s viewpoint; that the system can not be reformed from within. “We’re not interested in change through the electoral process or anything like that,” said Larson. “It makes no sense to us to put ourselves in the position of supplicants, of asking for help. It concedes power.”

Occupier Rick Theis disagrees. “The framers of the constitution put together a system that is fairly intelligent and able to change in a positive way and I think we can make the changes that we need to within the system,” said Theis as he discussed creating an Occupy voting block in Congress.

It’s not clear which one of these schools of thought will rise to the top of the Occupy movement or if protestors think it’s even necessary to choose.