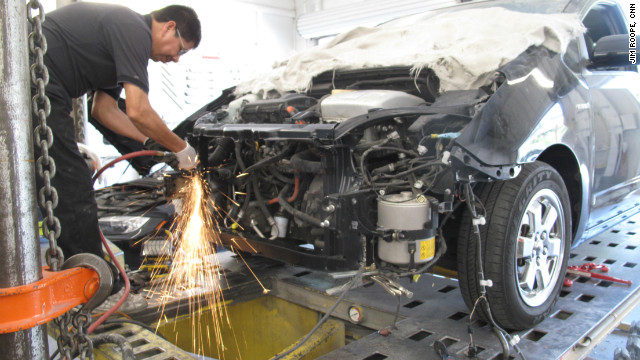 Jose Gonzales works to repair a front-end-damaged Prius at a body shop in the Body Shop Bids smart phone app network.
Update Required To play the media you will need to either update your browser to a recent version or update your Flash plugin.
May 3rd, 2012
05:23 PM ET

"I went to three shops in my area and I got three completely different estimates for the exact same repair,” said Weisberg. "It was such a frustrating experience. There was no transparency in the industry, there was no one to tell me why the estimates were different.”

Weisberg said in one case, there was an $800 difference in the estimates. This happened to him in Los Angeles about three years ago. He moved to Chicago in 2010 but that frustrating body shop experience kept eating at him.

“It made me so mad and I thought to myself, there’s got to be a better way,” Weisberg said.

And he remembered one thing in particular about his shop-to-shop visits.

“They didn’t actually touch my car. They just looked at it, you know, typed something into a computer and gave me an estimate,” he said.

So he thought, “Why couldn’t they do this by photo?”

“Technology is here. Every smart phone has a six-mega-pixel camera minimum on it; why couldn’t I send them a picture, he said?”

What developed, after a few experiments with getting body work estimates with photos, was the website and new app, “Body Shop Bids.”

Weisberg said that body shops will always have their drive-in traffic and referral business, but there is a whole generation of people doing everything online. Not just shopping for quotes, but wanting to see the shop, read reviews, look at pictures of work done. This is a trend not lost on some body shop owners.

“It’s the way it is. Everyone has an app,” said Patricia Mattar, owner of Topanga Auto Body in Woodland Hills, California. “And if you’re not up with the tech apps and the technology then you’re going to go by the wayside," she said.

Gary Mikayleyan manages Magic Hands Paint and Auto Body in Northridge, California. A former computer science professional, Mikayleyan said he was doing an internet search for ways to increase his customer base.

“I saw ‘Body Shop Bids,’ [and I] just thought about it, just why not. Let me try it," Mikayleyan said.

And it’s bringing him business. While talking to him at the shop, a car was brought in with front-end damage as a result of a successful estimate through “Body Shop Bids.” One of his recent customers, 23-year-old Daniel Dominguez, had his 2003 Jaguar repaired at Magic Hands after accepting a “Body Shop Bids” estimate from that shop.

“I got tired of driving around getting quotes,” said Dominguez. I was looking online for another way and I found ‘Body Shop Bids.’ I thought, what do I have to loose so I downloaded the app and sent in a report,” Dominguez said.

He got three quotes within 24-hours and decided to go with the estimate from Magic Hands.

Apps like this not only make is easy on customers, but they are also changing the way one industry does business.