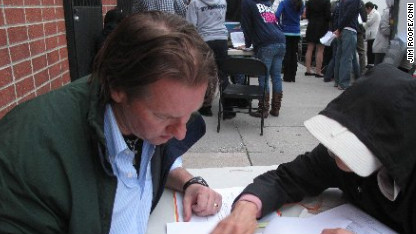 A faith journey leads a lawyer to a "legal ministry" of serving the poor and homeless in Los Angeles.
Update Required To play the media you will need to either update your browser to a recent version or update your Flash plugin.
May 9th, 2012
01:24 PM ET

“One of the most successful law practices in Los Angeles,” Amos said. “We all made a ton of money.”

Amos had gone from having what he said he thought was, “enough money to last a lifetime,” to living modestly while providing legal services to those with very little means or none at all.

Amos, 53 with a wife and three adult children, said he’d always been a practicing Catholic. He’s a parishioner at St. Paul the Apostle Church in Westwood, California. As he became more active in his church he said, and as his faith grew stronger, he began to think about doing more for others than himself. He joined St. Paul’s homeless outreach program.

Every Wednesday evening, he would go out to the corner of Sycamore and Romaine in West Hollywood, not far in miles from his home in upscale Westwood, but economically world’s apart, and help to feed the homeless population there. The Greater West Hollywood Food Coalition would set up a truck from which they would feed the people on the street. There was also a mobile medical truck staffed with volunteer doctors, nurses and medical students from UCLA to provide basic medical care. As Amos talked with the people there and heard their stories. He found they had yet another need beyond the meal. Many had legal troubles.

“I thought, I can’t practice law like that and be in this program with my church,” said Amos.

He talked with is wife Stacey, about an idea to start a company that would give the poor and homeless access to good, honest attorneys: a lawyer referral service that he named ‘Higher Legal.’

“For a higher purpose,” said Amos. “Because that’s where my life was taking me, to a higher place, and I figured I could use my 25 years of experience to make sure everybody didn’t get ripped off by the sleazy plaintiffs’ lawyers that everybody knows about. And because I’m married to a saint, she said you know, let’s give it a shot,” he said.

This was four years ago. Now Danny sits at a small table with two rusted folding chairs on the sidewalk every Wednesday evening, after serving food to the homeless, and tries to help them with any legal troubles they have.

On this Wednesday, Mrs. Shin, a Korean immigrant in her late 50s to early 60s presents Danny with old documents from a case that she says involves a real estate dispute with family members.

“I am homeless because I paid private loan and interest and interest,” said Mrs. Shin through tears and broken English.

She claims she took out a loan in her name and purchased property which she put in the name of some family members who then left her with paying the loan while they took the property. She was forced out and has no money to fight the case.

“What I think we need to do is we need to go to court and get the most current documents from this case,” Amos told her.

Amos will now contact the court, get the most recent documents from the case using the case number from old documents she has. The problem is, he has no way to reach her. He can only hope she’ll return next week so he can continue to help her with her case.

“Mrs. Shin’s case is rare,” said Amos. “Most of what I see are cases with a criminal overtone. They’re infractions. They’re misdemeanors. Things like guys urinating in public, or sleeping on a bench where they shouldn’t be or getting onto the subway without buying a ticket. These folks wind up in those circumstances over and over again and then the problem becomes, they get cited, they get a ticket and then they forget to go to the hearings. So then a warrant is issued for them. And it happens over and over again and they deeper and deeper into a hole,” he said.

Many of these cases can be brought to homeless court. A Superior Court Judge will come to a location in that neighborhood and hear the cases. If they are non-violent and there are not drug-related issues, in many cases the tickets, fines and warrants will be dismissed.

Danny said now they have a clean slate.

“Now you got a guy, who feels like he has some hope in his life and can go out and get a job. Because when the employer runs his name through the system it doesn’t show up that he has all of the fines and warrants and everything else.”

Amos said that is success to him. It has not come easy. There has been much struggle for him and his family. He had to sell his home and car as he built ‘Higher Legal.’ But Amos’ faith has helped him, he said, to see how blessed he is.

“I have a job and a family, a place to sleep and a warm bed at night,” he said. And these people who are all leaving here now tonight, they’re all going to this corner and that corner and behind that bus and this bench,” said Amos.

He said it’s hard for him to leave and go home knowing that the people here have no place to go. It’s why he’ll be back here next Wednesday and every Wednesday.