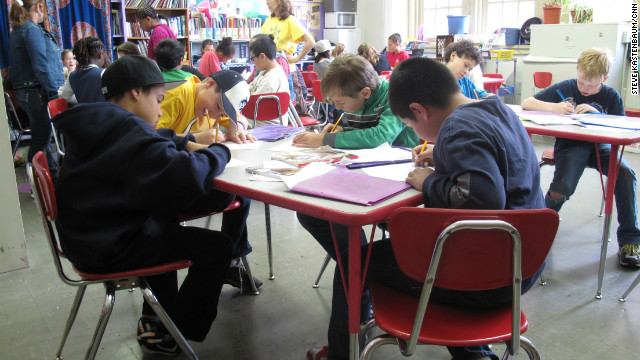 5th graders at P.S. 146 in Brooklyn, NY took statewide tests in English and Math this year. Their test scores were used to rate their teacher's performance.
May 16th, 2012
04:48 PM ET

The high stakes of standardized tests

(CNN)- Standardized tests are nothing new in public schools. Chances are you filled out bubbles on an answer form at some point during your schooling. But for the past few years, scores from statewide tests in English and Math have been used to determine which schools are doing a good job of educating students and which are failing.

Today, the test results count for more than just a letter grade for a school. Teachers in some states are now being labeled good or bad based on their students’ scores. Welcome to the world of high-stakes standardized testing.

“I find it the most absurd thing in the world. I don’t know anyone who thinks they’re valid,” said Principal Anna Allanbrook at Public School 146 in Brooklyn New York.
“So the morale is down because teachers are worried that people who don’t really know their work will make decisions about their jobs.”

Standardized tests have long been used as one measure of a student’s progress in core subjects. But now, federal funding hinges on test results. It started with President Bush’s No Child Left Behind Act which requires states to rate schools based on test results in order to receive federal funds.

President Obama’s administration then dangled an additional 4.3 billion dollars in front of school administrators in a competition called Race to the Top. In order to qualify for multi-million dollar grants, U.S. Department of Education spokesman Peter Cunningham said states had to include test results in the process of identifying good and bad teachers. “Some of those testing results need to be used to help identify schools that are struggling so that we can give them additional interventions but they also need to be part of how we evaluate teachers,” said Cunningham.

Across the country, teachers, principals and parents are pushing back against the test results carrying so much weight. More than 1,400 New York principals signed onto a letter to the state education commissioner that said the tests are deeply flawed. The outgoing Education Commissioner in Texas called standardized testing “the heart of the vampire.” Jenny LaCoste-Caputo of the Texas Association of School Administrators said, “This one test has become the single measure for a student’s success, for a school’s success, and that’s what is absolutely wrong.”

The idea that test scores should be considered when evaluating a teacher’s effectiveness grew out of a desire to reform education systems across the country. But Cunningham said the Department of Education never intended for the test scores to be the only measure by which teachers are judged. “Absolutely not. We actually call for multiple measures. We believe that testing should only be one measure of a teacher’s effectiveness, not the whole measure by any means.” Cunningham said principal observation as well as feedback from peers, parents and students should be taken into consideration, too.

Diane Ravitch is a historian of American Education at New York University. She said the intention may not have been for test scores to count for so much. But that’s what seems to be happening in school systems across the country. “So now we have schools being closed and people getting bonuses all around the student test scores,” said Ravitch. “It’s made testing, somehow, the central activity of American public schools today which is just so wrong.”

Ravitch believes standardized tests provide important feedback on individual students which helps teachers meet the needs of those children. But when high stakes are attached to standardized tests, Ravitch said the tests become corrupted. “People cheat. We’ve seen major cheating scandals in both Atlanta, Georgia and Washington D.C, but in many other districts as well,” said Ravitch.

Some educators blame the testing industry for the elevated importance of standardized testing. There are four companies that publish the majority of school tests in the US. Kimberly O’Malley is a vice president at Pearson Education. She said the tests aren’t created in a vacuum. Some teachers are involved in every step of the process.

“We invite educators and assessment experts and they go question by question evaluating and asking directly does this question measure what it is supposed to measure,” said O’Malley. "Does it do a good job of measuring it? Is it fair? Is it free from bias?"

They then try out the tests with a sample group of students, evaluate the results and make changes as needed. O’Malley agrees that test scores alone can’t paint a complete picture of what is going on in a classroom. “The standardized test is just that one day snap shot at the end that then gets combined with that rich local information about how students have done all year,” said O’Malley.

That may be the case but at P.S. 321 in New York, Principal Liz Phillips said teachers, administrators and parents all feel that too much is riding on the results of the tests. “If I believed that this system actually could show you who the great teachers were and who the terrible teachers were that would be another story,” said Phillips. “It doesn’t say that at all.”

At the US Education Department, Cunningham isn’t surprised by the pushback. He said change is not an easy thing. “I think we’re all going to learn from it and they’re going to continue to adapt and approve upon it,” said Cunningham. “But ultimately, the outcome here that we are all trying to get is that teachers and administrators have a real sense of who is succeeding and who is not succeeding.”

Eleven states and Washington D.C. were awarded grants through the Race to the Top program. New York State received $700 million. If standardized testing weren't a part of teacher evaluations, New York would not have gotten that money.