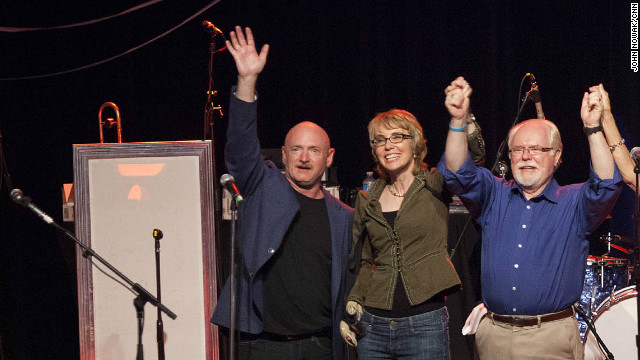 (Tucson) – Voters in Arizona's 8th Congressional District will decide Tuesday who will serve out the remainder of former Rep. Gabrielle Giffords's term. The race is being viewed by politicos as a test for the fall and by observers as taking the temperature of the nation's political discourse.

After the tragedy, controversy erupted over speculations that divisive political rhetoric may be to blame. And at a memorial service, President Obama asked for more civil discourse.

“I don’t think anybody thinks incivility caused the tragedy,” says Kate Kinski who teaches government and communications at Arizona State University. “Nevertheless, it presented an opening for us to talk about the dissatisfaction with the way we talk about politics.”

If the race to replace Giffords were a test of whether discourse in American politics can be more civil, the jury is still out.

“Maybe it’s been a little more civil,” says Mike Bayard who volunteers for 30 year old former Marine Jesse Kelly. Bayard’s job is to put up campaign signs around the district. “Still there’s what I see, people destroying signs I put up, people stealing signs where I have to go back and put them up.”

Those antics may just be a regular case of strong partisan conviction. Arizona’s 8th is a competitive district where Republicans hold a 6.5 percent advantage in voter registration. Special elections like this one are generally decided by the party faithful, the ones who turn out despite the 100 degree temperatures in June.

“The candidates themselves have run a very civil race,” said Pima County Democratic Party Chair, Jeff Rogers. He says outsiders like Republican strategist Carl Rove are to blame for any incivility.

“All this outside money that’s come in from Carl Rove’s group and the Republican national committee and those… their ads have not been as civil I would say and that’s on both sides.”

Indeed, attack ads have appeared for both sides. A Super Pac dedicated to electing Democrats to congress ran a television ad that used comments made by Jesse Kelly in 2010 against Gabby Giffords. In the video he calls Giffords a “hero of nothing.” Kelly calls the ad despicable.

“To try to exploit a tragedy to try to win an election is one of the saddest things I’ve seen in my life.”

For his part, Democrat Ron Barber seems uncomfortable with the ad, but Super Pacs operate independent of candidates.

“Yes, the Super Pacs came in and ran some ads,” he said. “To be honest I wish we didn’t have Super Pacs. We need campaign finance reform and I’ll be the first one to sign up”

Tuesday’s special election is the last congressional race before the November elections and that’s why it’s important according to Arizona State’s Kate Kinski. “Congressional District 8 is a microcosm of the tensions we see in the nation overall. One of the thoughts is, if we can’t get this district right, how can we expect the nation overall to become more civil and to reach conclusions to recognize the other side the best it can.”