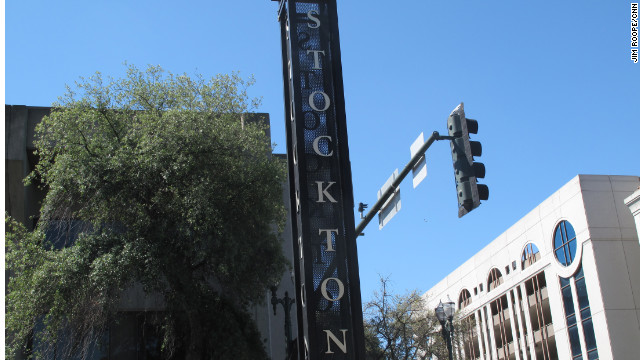 A visit to bankrupt Stockton

(Stockton, CA) – The city of Stockton, California has become the largest US city ever to file for bankruptcy protection.

Stockton’s city council voted 6-to-1 in favor of filing for Chapter 9. City Manager Bob Deis is expected to file the paperwork before July 1 when the city budget is due.

Since 2009, Stockton has cut $90 million from its budget. It’s reduced its police force by 25 percent, its fire department by 30 percent and cut 40 percent of other city jobs. But the city still has not been able to find financial stability. And then, said Mayor Johnston, there was the housing bust.

“The housing was the straw that broke the camel’s back,” said Johnston. “We had this bubble in our economy here. We were booming in construction. We were building about 3000 homes a year. It began to fall off sharply three-and-a-half years ago,” she said.(2:42)

Richard Acosta is a 75-year-old retiree in Stockton and said everywhere you look there are 'For Sale' signs.

“You have two across from my house. There was like four on the other side, and there’s about two or three more down on the next block,” said Acosta. “I always thought the city of Stockton was really gonna go somewhere. But I don’t really see any future in it for 5-to-10 years before something really is going to happen here,” he said. (5:00)

There is no indication, Johnston says, of how long it will take to bounce back financially. The city of Vallejo, California declared bankruptcy 4 years ago and is just now showing signs of recovery. Vallejo is about a third the size of Stockton.