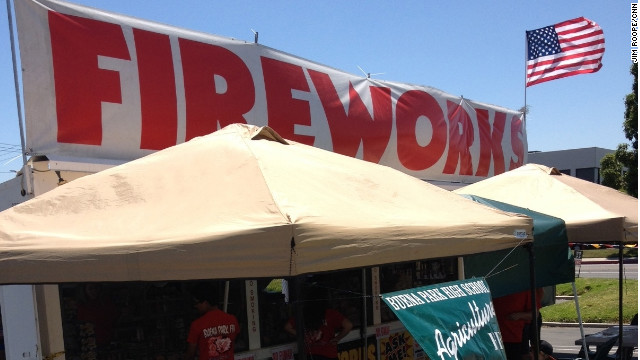 Forty-Six states, the District of Columbia and Puerto Rico allow the sale and use of fireworks in the US.
July 4th, 2012
03:05 PM ET

(Buena Park, CA) – Fireworks stands pop up in cities all across the country in the days before the 4th of July. In what cities and what they sell are dictated by the fireworks laws in each state. In California ‘safe and sane’ fireworks, the kind that don’t explode or shoot up in the air, are legal, but still many counties and cities ban them.

Fireworks laws vary from state to state, county to county and city to city according to Julie Heckman with the American Pyrotechnics Association.

“There are a number of states that offer what we call full line consumer fireworks. Meaning they’re not restricted,” she said. “They’re allowing the broad categories of consumer fireworks stringently regulated by the U-S Consumer Products Safety Commission.” [1:47]

There are only four states that completely prohibit the sale of fireworks; Delaware, Massachusetts, New York and New Jersey. That leaves 46 states, Washington, DC and Puerto Rico that allow them.

Fires and injuries are the biggest reasons for restrictions and prohibitions of fireworks. The bottom line is be careful. Monitor kids; have water and a first aid kit available. You can go to the American Pyrotechnics Association to  find the fireworks laws in your state.