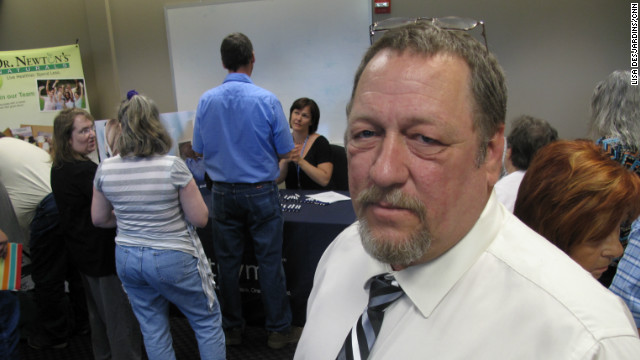 Embed America: What The Candidates Don’t Know About Jobs

Lewiston, Maine (CNN) – President Obama and Mitt Romney can point fingers at each other over outsourcing all they want, but in Lewiston, Maine people told us the candidates neither understand the problem with jobs nor how to solve it.

Lewiston, nicknamed “the industrial heart of Maine," is a near perfect sample of what’s happening across the country – a place that is both creating some jobs and suffering because it has too far few of them.

It is a town of old brick industrial mills. Some closed, some becoming condos. But none leading to many jobs.

[5:23] Unemployed worker Mike Thomas on the election: “I mean bottom line, it doesn’t affect me that much." Lisa: "these two men are running for president and you think it doesn’t affect you?" Mike: "well, what they’re talking about doesn’t trickle down to me. It doesn’t seem to anyway.”

There are a dozen issues Embed America is covering first hand this month, crisscrossing the highways of America. None of them gets more time at the political podium than jobs.

People here in Lewiston pride themselves on being industrious, but many are like Mike Thomas, knocking on every door they can find and getting no offers. For years. There are some people you meet who you don’t ever forget and Mike Thomas, a construction worker who has been looking for a job for two years now, is one of them. He is a big bear of a man who talks about throwing yourself aggressively at any struggle, but who also tears up thinking of the limited food he, his wife and stepson live off now.

[4:37] Thomas on spending months retraining for a possible medical technician job: “Went through 8 hospital rotations from gyn to open heart and after all the tests, we took the natl certificaion which we passed. And just got on the trail to jobs, sending out applications and resumes to every hospital and medical facility in the area." Lisa: "And then what happened?" Mike: "nothing. Nothing happened.”

At the same time, Lewiston is the site of an incredibly good jobs story, one that many hope will set the stage for national change. Boston-based Carbonite, a computer services company, has closed its outsourced call center in India and moved more than 150 jobs stateside, to Lewiston.