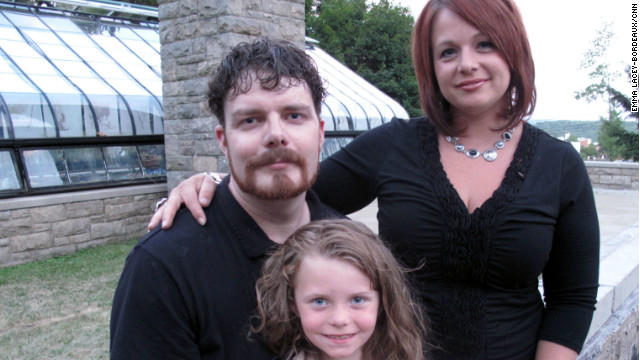 Jayden Cramer with his wife, Renee, and their daughter, Sarah, at Schwab Gardens in Loretto, Pennsylvania.
July 13th, 2012
01:49 PM ET

Loretto, Pennsylvania (CNN) – Standing at twilight in Loretto, Pennsylvania, Jayden Cramer takes his time thinking over the importance of this presidential election. The machinist, husband and father has not yet decided who he will vote for, he wants to check out the candidates' records before reaching his decision.

The rolling hills and fabulous gardens surrounding Cramer are part of important territory this election year. Pennsylvania has 20 electoral votes in the offing. Mitt Romney has vowed to win this state, which last time went for President Barack Obama. With voters like Cramer, both candidates face an uphill battle.

Although his community grapples with outsourced jobs, Cramer worries most about regulations, "They are trying to over-regulate everything we do to the point that we can't be people anymore."

"I'm very hopeful this year that during elections somebody will get in there who will continue to stand for the things that have made this country great, and things that have helped this country to help other countries. I'm not looking for a handout...but enabling people to do what they need to do to... thrive and to pursue what they believe." [1:10]

A few miles down the road, in the tidy town of Evansburg, Pennsylvania, Linda Eckenrode has made up her mind. She will vote for Barack Obama. She feels he will support teachers like her.

But she has lingering questions, especially about the President's health care law. She has health insurance and believes others should too, but she worries about the bigger effects of the law.

Her face scrunches up as she speaks about her worries for her children's future and about budget cuts to education. At times she feels like the world changes too fast for her to keep up.

Still, she'll cast a ballot this year, just like she always has, because she says:

You can check out all our Embed America coverage here. And track the Embed team's progress on our map.