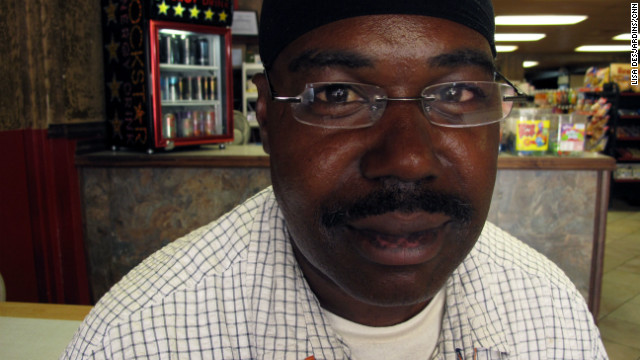 Dayton, Ohio resident Dray Pier hopes the candidates will offer more ideas to get people like him back to work.
July 18th, 2012
08:00 AM ET

Dayton, Ohio (CNN) – About a month ago Dray Pier dropped his glasses. They fell on the pavement and broke. He’d like to replace them and get a pair without a chip but it’s just not in his budget.

On a recent hot afternoon in Dayton, Ohio, Pier was one of a handful of people who stopped to talk with us as part of our Embed America coverage. Some have great jobs and were enjoying their working lunches. Some, like Pier,  have struggled to find stable jobs in this economy.

Pier, 44, once had a job in manufacturing but now is unemployed. He mows lawns for neighbors to make ends meet.

He speaks plainly about his situation. No self pity. No pretense. “You gotta rough it,” he shrugs. But he does think that politicians need to do more than just talk about job creation.

The candidates could do well to pay attention to this particular voter. Ohio remains an important swing state and the Dayton area, which went for President Barack Obama in 2008, is an important one for Mitt Romney.

In Pier, Romney might have a glimmer of hope. Although he’s planning to vote for President Obama, Pier is open to Romney:

[1:25] “If he had poor people in mind, because I am poor, you know, working poor, and came out with some policies and ideas about what he's gonna do if made president, then I'll have to take a look at that and see what he got and go from there.”

Looking ahead to the election in November, Pier says: “I think it’s the most important election in 75 years.”  Important because the victor will need to do something about jobs but also they’ll need to repair our social fabric torn during these years of recession, he says. In the meantime, Pier will keep looking for a job and hoping that the economic storm which has battered him, this community and this nation, will finally pass.