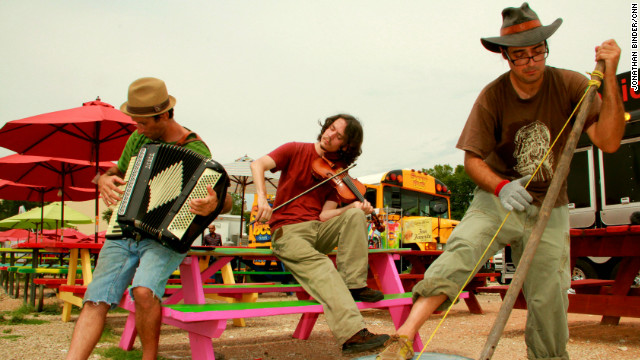 Austin, Texas (CNN) – Even in the middle of an overcast Tuesday afternoon, South Congress Avenue in Austin is still cluttered with people. People move through the countless shops and spots to eat, including about a dozen food trucks parked along the street.

From the picnic tables in front of the trucks, one can hear the haunting folk music from the trio, If This Trailer Had Wings.  The members include Jacob Marshall on violin, William Michael Landine on the washtub bass, and Zeferino Chrones on accordion.

The band was more than happy to take a break to talk about this year's presidential election. However, they weren’t happy with either candidate in the election. Although Marshall is voting, he’s not too optimistic about the potential outcome:

[0:50] “I don’t look forward to another four years of Obama, I just think he’s the better option right now.”

But no matter who the candidates are, having to choose between only two political parties isn’t enough of a variety for Ladine:

[0:57] “I had the intention of voting, but it’s sort of like to me voting for Coke or Pepsi, which are both made of the same materials except one is one is slightly sweeter than the other.”

Marshall, Landine and Chrones remain hopeful that things will eventually improve and they can keep doing what they love to make a living. So as the political talk faded, the band picked up their instruments to play once again for the passing crowd.