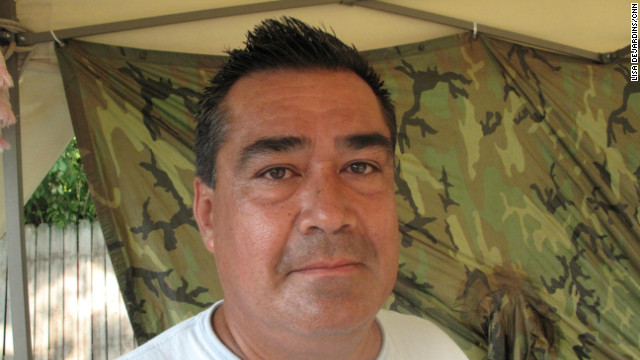 Vigo County, Indiana (CNN) - Driving through a central Indiana highway that cuts through rows of corn, an untrained eye could miss the signs of a drought. Francisco Preacado knows better. With a warm smile, the father of two rattles off the weather forecast for the next few days: 40 percent chance of rain this day and 50 the next, but you just never know. Preacado has a lot to say about this election too. He’s willing to give President Barack Obama another term. He’s happy with the president’s stance on student loans. He does worry about the economy but thinks Obama is doing good things, it’ll just take time:

[1:12] “It’s difficult to fix everything in just one minute,” Preacado says.

Preacado talks a lot for his job. He runs a small farm stand for his boss, Dick Godfrey. Preacado spends time answering questions about the produce: "When was it picked?" This morning. "Where is it from?" Indiana. But when it comes to his boss and the talk turns to politics, Preacado just listens. The two don’t see eye to eye. Not surprising in this state whose 11 electoral votes went to Obama in 2008 but , this year, is classified as leaning Republican. Dick Godfrey does more than just lean. Godfrey will vote for Mitt Romney this year. He’s not thrilled with Romney though. He laughs dryly and says:

[0:36] “I only got one choice in the presidential election and Obama isn’t one of them.”

Although Preacado is sticking with Obama he’s not exactly thrilled with his candidate either. Like his boss, Preacado says he’s tired. Things in this community are hard he says:

[1:46] “It’s just corn and beans around here. There are no big companies. They’re gone all of them.”

So, with four months to go, two men in Indiana have decided on their candidates. Both voting for imperfect choices they say, and both hoping for better times ahead.