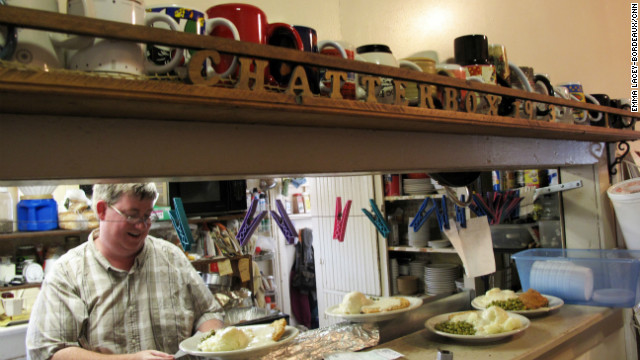 Gary Person, 41, cooks at the Chatterbox Cafe in Lone Rock Iowa, a town struggling to keep young people. Person says he'd leave if he could find other work.
July 21st, 2012
08:30 AM ET

Lone Rock, Iowa (CNN) – The American small town, the inspiration for singers and playwrights and a cornerstone of the American identity, is in danger. Across the country, rural populations are dropping and the average age of their residents is rising.

[3:20] "I’m scared to even think about it because as we lose one place after another it almost makes us feel like we’re a little dying town. But we don’t want to think that."

For this story, Embed America focused on a standout place: Lone Rock, Iowa. Many of the 146 residents are close-knit neighbors. They have joined forces to harvest a sick farmer’s field and to cook, clean and operate the Chatterbox Café when its owner was ill. They’ve worked hard to keep their community alive. But according to the U.S. Census, the average age in Lone Rock has shot up to nearly 57 years old. There are few young people to keep up the work.

[3:39] Jerry Thompson, mayor of Lone Rock: “Our volunteer force is dwindling. I think the youngest person on my ambulance crew is 45. And that’s not real young. There’s nothing to keep young people here.”

In Iowa, the problem is made more complicated for some 500 towns, which the state Department of Natural Resources says are not in compliance with the Federal Clean Water Act. The towns’ septic tanks are leaking into the ground water. To fix the issue, hundreds of towns which are already struggling to survive now face the daunting prospect of financing new sewer systems that can cost a few million dollars a shot.

Lone Rock plans to take out a $600,000 loan to pay for the sewage system it needs. That will cost each house about $40 or $50 a month, something that may be tough for the many senior citizens living off social security in town.

All this has residents questioning the hand of government: feeling that the government is not promoting new jobs in rural areas and at the same time is requiring those areas to put in new, costly infrastructure.