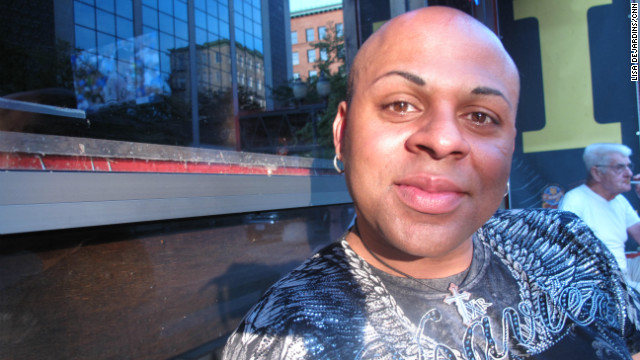 Editorial Note: This interview indicates the effect of negative ads in this campaign. Our subject, Joshua Martin, refers to ads and questions whether Mitt Romney has been honest about when he left his company, Bain Capital. Romney insists he stopped running the company in 1999 and that Bain mistakenly listed his name on some SEC documents after that time. Additionally, Romney says that he did not send American jobs oversea, while the Obama campaign has launched ads asserting that he did.

Cedar Rapids, Iowa (CNN) – The road leading to Cedar Rapids is open, lined with farmland and quiet. But the city where most of Iowa's corn is processed, has a buzz about it.

Embed America found waiter Joshua Martin chatting with friends outside a bar in the downtown section that has bounced back with vitality after the 2008 flood.

Sitting in the last sunlight of the day, Martin told us he is voting for President Obama again. One reason: recent ads from the Obama campaign that cast Mitt Romney as a man who outsourced American jobs while he worked at Bain Capital. Romney vigorously denies that and has asked the Obama campaign to apologize for the ads.

The ads affected Martin, who believes them:

[:44] "I feel that if Mitt Romney was really for our country, he'd be creating jobs and not giving jobs to overseas."

The Obama campaign is hoping for strong support from this liberal leaning city, which the president won by 20 points in 2008, in order to take Iowa and it's six electoral votes.

Martin, who grew up in Cedar Rapids, has another reason for supporting President Obama. The Iowan wants gay marriage to become legal.

[1:15] "What do I hope for myself in four years from now? That I live in a country where I'm free to do whatever the hell I want to do and not be judged for it."