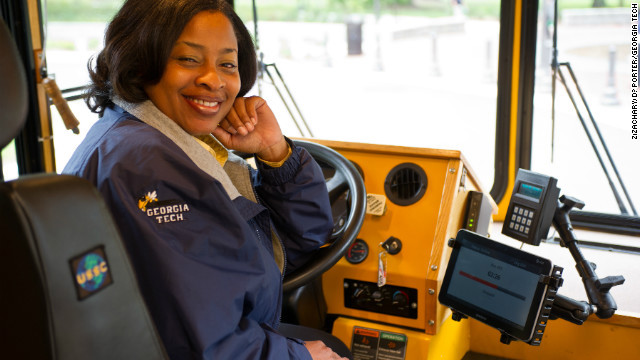 Cebrina Benson’s Georgia Tech bus is equipped with GPS and a computer pad that allow her to drive without a schedule.
July 26th, 2012
07:30 AM ET

Waiting on a bus? Math can help

(CNN) – To get around the Atlanta campus of Georgia Tech, student Alexandra Gaigelas takes a shuttle bus. She says she often waits too long for a bus.

And that second bus is largely empty. It's a problem known as "bus bunching," and it happens when buses are thrown off schedule because of traffic, weather or too many passengers at one stop.

And when those buses are off schedule, the drivers try to adjust. Student Sukirat Bakshi says he's been victim of a bus "drive-by:"

[:48] “It happened to me where the driver just would not stop at a stop. They would just run off to catch up to the schedule.”

It turns out math can fix the problem. Georgia Tech professor John Bartholdi and University of Chicago professor Donald Eisenstein used complex algebra to develop a kind of anti-bus-bunching formula. They put what’s known as the Markov Chain through the wringer. It’s a math theory that shows predictable long-term behavior.

[1:26] “The trick is to hold the bus for an adjustable amount of time at one stop,” Bartholdi said. “We simply control how long they wait at the end of the route, and then we tell them, 'drive comfortable with the traffic to the other end. Don’t worry about where you are. Just flow with the traffic.' "

Buses in the loop are all connected through GPS and a computer tablet. It signals to the driver when it’s time to leave. Georgia Tech is testing the theory on its shuttle system.

[3:09] “This tells me exactly when it’s time to go, and the communication between each other is done automatically, so it takes a lot of stress from us,” said Clarence July, who drives one of the gold and yellow Georgia Tech buses.

Drivers can ignore the schedule, and riders on campus can walk up to any stop and know that a bus will come within approximately six minutes. Bartholdi and Eisenstein say their math formula works for any shuttle system that runs in a loop in which buses are no more than about 12 to 15 minutes apart.

Here's how Bartholdi explains the equations used to calculate the space between buses:

This equation is actually a bunch of equations: one for each bus. The first line describes how the headway (the space between buses) changes for the bus that is currently at the end of the route (the turnaround point). Alpha (in red) is a control parameter – a number, say, 0.5 – by which the bus manager chooses whether the bus should wait longer (and fix imbalances faster) or vice versa. The "v" is the average velocity of the buses.

The second line describes how the headways of the other buses change.

This collection of equations describes how the headways change from bus arrival t to the next bus arrival t+1. In other words, it predicts the future behavior of all the buses.

Don Eisenstein and I recognized that this set of equations has a very special algebraic structure: they describe a "Markov Chain," which is a sequence of events for which the future can be predicted by knowing merely the current state (no history is needed). In our case, we only need to know the most recent headways to predict the next headways, and the headways after those, and so on.

The theory of Markov Chains allows us to conclude that, in the absence of disruptions, the headways will move inexorably and quickly toward a common value, which is given in the equation above. What this means in practice is that the buses will move away from each other, to space themselves more evenly. In other words, we will have created a force, a sort of "anti-gravity” that pushes the buses apart and so resists bunching.