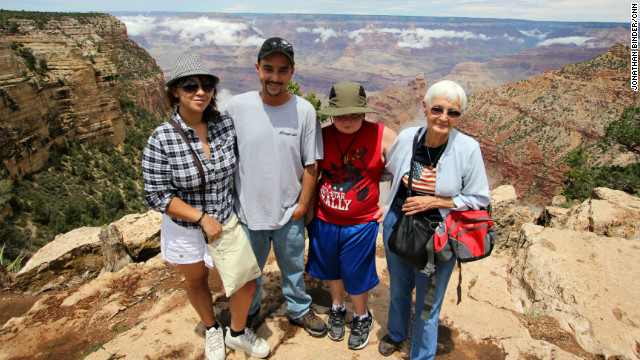 Grand Canyon National Park, Arizona (CNN) – A road trip through the American South West wouldn’t be complete without a stop at the Grand Canyon in Arizona. Embed America’s Team South visited the canyon to not only admire the scenic views from the rim, but also to get the political views of a family visiting from Lake Arthur, New Mexico.

Carrie Jackson, Clinton Jackson, Jessica Gamboa, and future voter Darin Jackson, 11, were on a family road trip together. And despite them not all agreeing about politics, they say it would take more than politics to ruin their vacation.

Although their votes may not all line up, there was a shared frustration with the lack of cooperation across the aisle in Washington. Gamboa says the government needs to come together:

[1:39] “I wish it would quit being Republicans against Democrats – would learn to work together as a people and realize government wasn’t so powerful because right now it’s like a tyranny. They’re making too many, too many laws and rules, that it was never meant to be like this.”