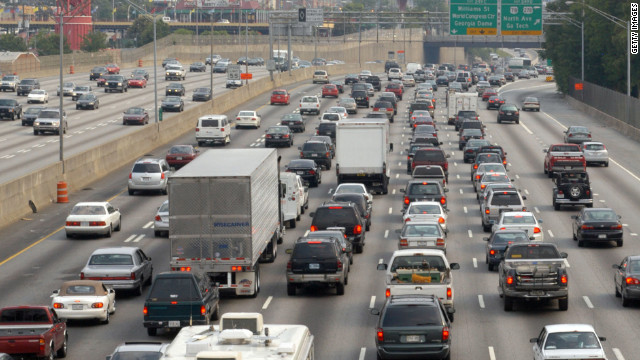 Atlanta hopes some of its gridlock problems will be solved if voters approve a controversial penny tax for transportaiton.
July 30th, 2012
02:43 PM ET

Taxing yourself out of a traffic jam

Atlanta (CNN) - There’s a lot of anger in Atlanta over traffic, but it’s not just road rage. You’d be hard pressed to find anyone who lives in the city, or has driven through it, who won’t tell you that something needs to be done about gridlock here.

[:29] “We’ve been a victim of our own success,” says Reese McCranie with the Atlanta mayor’s office. “We grew at such a pace that it outpaced our infrastructure.”

Atlanta’s mayor hopes people will vote Tuesday for a one-cent sales tax that would fund transportation projects around the metro area. Georgia’s Republican-controlled legislature is the architect behind the plan and it’s not welcomed by Neill Herring with the Georgia chapter of the Sierra Club. He charges that lawmakers should’ve dealt with transportation funding:

[1:15] “Instead they are concocting these schemes that they put on the ballot. It’s very confusing. It’s so poorly constructed that no one can make an intelligent choice.”

The Sierra club argues that the penny tax won’t pay for enough public transit. The environmental organization has found an unlikely ally in the Georgia Tea Party, which says the vote is a convenient way for Republicans to hide a tax increase. Most Republican state lawmakers in Georgia signed a "no tax" pledge.

[2:55] “There’s a fundamental difference between imposing a tax on the population and letting the population vote on it,” says Brian Robinson, a spokesman for Governor Nathan Deal who also signed a no tax pledge.  “This isn’t the legislature and the governor raising taxes, this is Georgians getting a say in how we move forward in fixing our transportation imbroglio.”

Robinson says federal money for infrastructure has been drying up and states have to find creative ways to meet their own needs. Atlanta boosters warn that if voters reject the penny tax the region will take a big economic hit and any solution to gridlock on the streets will be put off for years.