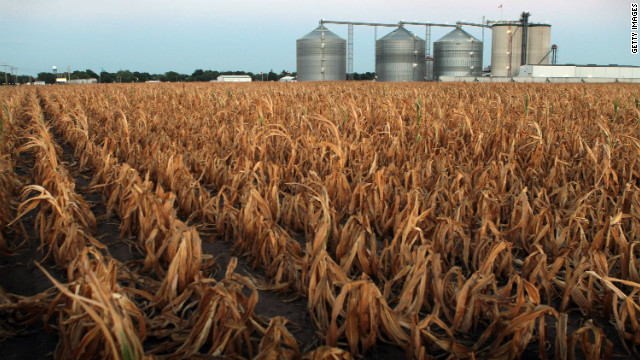 A field of dead corn sits next to the Lincolnland Agri-Energy ethanol plant in Palestine, Illinois.
August 3rd, 2012
12:33 PM ET

(CNN) - A substantial amount of the Corn Belt is in extreme drought. As a result, this year's crop yields are threatened and the price of corn is skyrocketing. This week, more than 150 U.S. lawmakers sent a letter to EPA Administrator Lisa Jackson urging action to reduce the Renewable Fuel Standard (RFS) to help ease corn supply concerns. The seven-year-old mandate, which was meant to reduce U.S. dependency on foreign oil, requires refineries to produce about 13 billion gallons of corn-based ethanol this year.

[1:14] " The fact that we are trying to answer what used to be known as an energy crisis by creating a food crisis is just the wrong direction."

But the President of the Renewable Fuels Association disagrees. Bob Dinneen says calls to waive any or all of the RFS are not only premature, they're unnecessary, because flexibility is built into the program:

[3:09] "The fact of the matter is when Congress passed the Renewable Fuels Standard in 2005 it anticipated that there might be anomalies in the marketplace."

Agricultural Economist Tom Elam says no matter what the EPA decides to do this year, he believes the ethanol policy should be reexamined:

[3:44] "You know we can mandate however many gallons of ethanol we want to but we can't mandate how many inches of rain falls on the Midwest in the summertime."

The EPA says it is working with the USDA to monitor crop yield estimates which will be released later this month. The agency says it will review requests regarding the ethanol mandates.