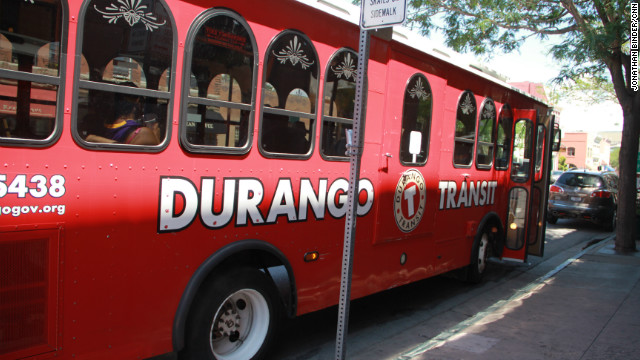 Durango has approved an ambitious plan that would put a bus stop within a 15-minute walk or bike ride from any point in the city.
August 3rd, 2012
11:56 AM ET

Durango, Colorado (CNN) - In the center of this small, Western town, there are bartenders who rock handlebar moustaches and pour sloe gin fizzes. Some waitresses wear feathers in their hair and tight-fitting western dresses while serving clams and steak. There’s an old rail car that rumbles through downtown, with a conductor dressed in a blue and white rail cap.

Much of downtown Durango seems like a Old West re-enactment.

Yet, this scenic town of 16,000 is pursuing one of the most ambitious transportation plans in the country. It includes miles of bike-ways and walking trails, and it aims for a public transit stop within fifteen minutes of any point in town.

[3:51] “We know that not every single initiative in this plan is implementable, particularly in the near-term,” says Durango Mayor Doug Lyon. “We don’t have to do the whole thing to be successful.”

This idea of phasing-in the project as the town grows is just one possible approach. Other metro areas often wait to implement transportation policies as a response to traffic problems. Recently, CNN's Tommy Andres reported on the massive traffic woes in metro Atlanta and how it's responding. Traffic congestion costs the U.S. about 100-billion dollars per year, according to a study by the Texas Transportation Institute.

Yet, this election year, both Presidential candidates have not focused on fixing transportation problems, or offering comprehensive policies. Durango Multimodal administrator Amber Blake says as long as people can just get in their cars and drive, transportation policy is taken for granted.

[4:58] “If there were no highways, or if you had to pay a toll every time you moved around, people would think more about how they move,” Blake says. “If there’s no funding left for highways, and public transit, and bike ways, and all of our roads turned to crumbled mass of asphalt, people will start to think about where their dollars are going, and why we need to fund highways and transit, and why it is a huge issue.”

What do you think? Is traffic congestion a problem where  you live? Is it an important election issue to you? Join the conversation in our comment section below.