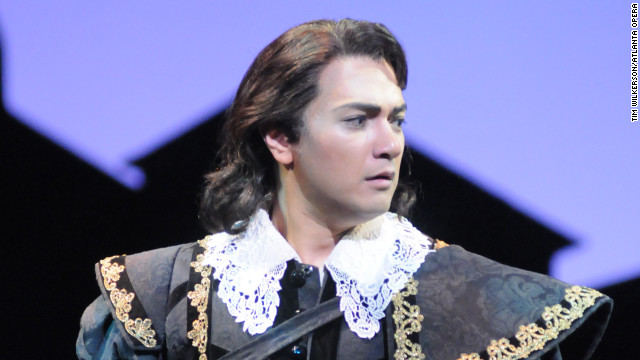 For young opera singers, hard work is no job guarantee

(CNN) - "Practice, practice, practice." That's the punchline to the classic joke in which a tourist asks a New Yorker, "How do you get to Carnegie Hall?" It's also the only way an aspiring young opera singer pursues his or her ultimate job. Of course, the talent and training are requisite, but transitioning from student to professional is tough. There are few Pavarottis, commanding million dollar concert fees and living the luxe life.

Most opera singers in fact work freelance: hired and fired at will. Soprano Angela Kloc who played the role of the peasant girl, "Zerlina," in the Atlanta Opera’s production of Mozart’s Don Giovanni, in March, says:

[0:49] "You work your butt off ! Honestly, its a lot of work, it's dedication, its getting to the level where you sort of live eat and breathe music 24 hours a day."

Hard stats are tough to come by, but according to the web site, Student Scholarships.org, 5% of musicians and singers are unemployed; a rate that is above the average for professional occupations. However, it's far below the unemployment rate for all young Americans aged 18-29 which, according to the U.S. Labor Department's latest figures, stood at 12.7% in July.

At the same time, it's very expensive to pursue a career as an opera singer. Training at Philadephia's Academy of Vocal Arts, for example, can cost up to $80,000 a year. Professional development coach Thor Eckert also reminds young opera students that it can take a long time to reap the rewards of all that training and discipline.

[1:21] "It's a slow process building a voice. It's a slow process getting a technique in final order. It can take sometimes two to three years for the singer to finally have the confidence and the skills and the understanding of how their voice works so they can go out and do what they need to do on a reliable basis."

Reporter Matt Cherry recently enjoyed a night at the opera with two up-and-coming artists gainfully employed in their chosen profession: as cast members of the Atlanta Opera’s production of Mozart’s Don Giovanni this past March.