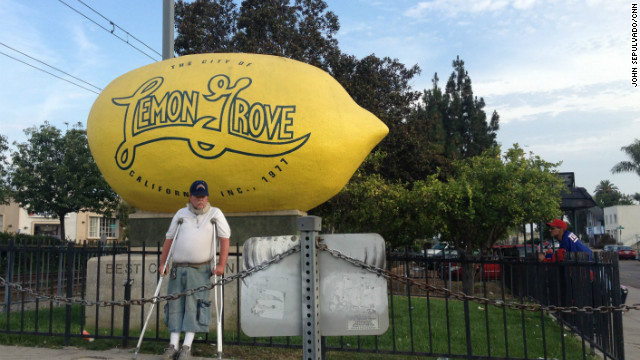 Like many American towns, Lemon Grove, California has been struggling to pull itself out of hard economic times.
August 7th, 2012
09:40 AM ET

Lemon Grove, California (CNN) - Our Embed America election series has been exploring the issues important to American voters and their communities. The stories we discovered frequently involve issues we're not hearing much about in the presidential candidates' campaigns.

From Florida to California, CNN’s John Sepulvado has been reporting on issues as varied as gun control, education, or public transportation and how those issues play out in the lives of American voters.

Wrapping up his leg of the Embed America journey across the southern United States, he takes us to his hometown of Lemon Grove, California. When he arrived there, his brother, James Sepulvado, told him the local recreation center was closing:

[2:51] “It’s kind of unique, as far as I know of, that the city had funded what was essentially an after school program,” says James Sepulvado. “We would play sports there, they had games like foosball, pool, you know, you could do arts and crafts…it was like, this safe place and there were some really amazing people that worked there, and they had this great knack for knowing which kids needed some guidance, and which kids needed some extra adult figures in their life. And I think they actually saved a lot of people.”

John started exploring why the center (called the "Rec" by locals) was closing. What he discovered were several problems affecting communities all over the nation including this four-square-mile Southern California town. Problems like declining tax revenues, a poor economy, and an influx of lower income residents:

[5:16] “I think [the problems in Lemon Grove are] just the accumulation of little things, like the years of a bad economy chipping away at programs and services that the city offers,” says Lemon Grove Patch editor, Christine Huard.

One of the common themes of the trip, John reports, is that from Miami to Lemon Grove, people want to see more leadership and less lip-service from their politicians and presidential candidates.