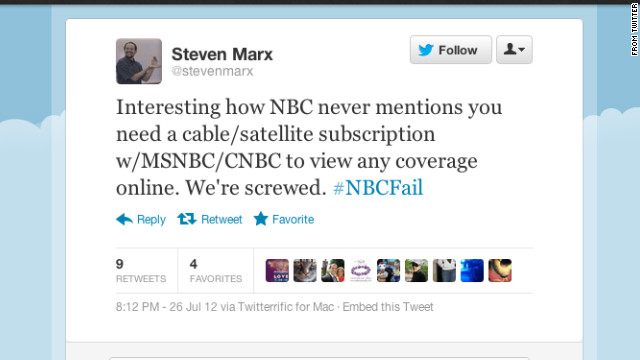 (CNN) – The 2012 Summer Games are over, and while the U.S. Olympic Team left with more medals than their competitors, the U.S. broadcaster, NBC is leaving London bruised by bad publicity.

The #NBCFail phenomenon got us wondering if NBC actually failed at their broadcasts of the 2012 Summer Games. We asked three media writers what they thought of NBC’s Olympic performance.

Eric Deggans of the Tampa Bay Times gave NBC an overall grade of B-:

[4:24] “I mean, they made a lot of unforced errors that I think tarnished the fact that by and large, they had this incredibly gargantuan task of trying to air every event on some platform,” Deggans says. “And in large measure, they pulled that off. But I think the public has been distracted by some of these mistakes they made that they didn’t have to make.”

Sportswriter Emily Bayci of the Bleacher Report also gave a grade of B-:

[5:57] “You can tell,” Bayci explained “[that] during the announcing during Primetime, that they know what’s going to happen, but they try to act like they don’t know, and it gets confusing. I think they’ve got a lot to improve on for next time.”

Time.com’s Graeme McMillan didn’t assign an overall grade, but he says NBC did a good job of repackaging events and turning them into a compelling narrative.

[8:19] “I think that you only have to look at the opening and closing ceremonies of the Olympics to know that this is more than a sporting event. This is entertainment. This is spectacle.”