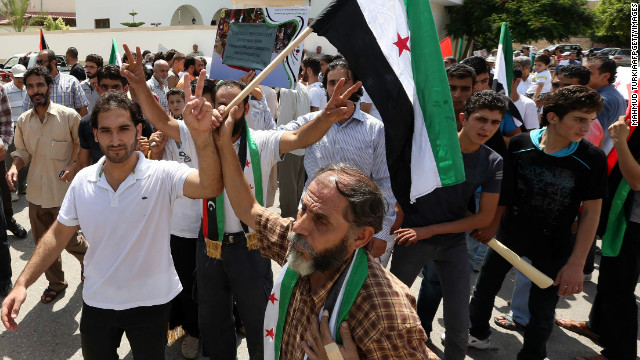 Syrian nationals protest in front of the Iranian embassy in the Libyan capital Tripoli.
August 15th, 2012
08:46 AM ET

[1:08] "I can confirm to you, given my experience and the position I had, that the regime's morale, economy and military has completely collapsed, and is only in control of no more than 30% of Syrian lands."

This isn't the first such claim against Assad's grip on power, but it is the most high-profile. And it comes on the same day talks resumed between the U.N. and Assad's regime in Damascus.

The organization of Islamic Cooperation also decided to expel Syria, further isolating Syria from a network of 57 countries and more than 1.5 billion people.

On the ground, weapons are still the main form of communication, but a string of new videos posted to social media have helped galvanize rebels and show a feat that some believe could be a turning point for the rebellion.