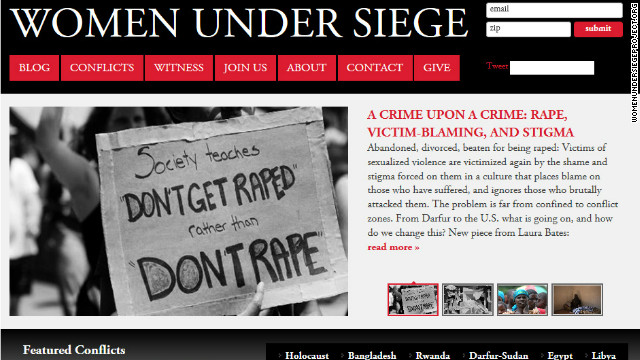 When Lauren Wolfe first heard about Congressman Todd Akin's comments on rape and abortion, her mind went to Rwanda:

[1:58] "There were hundreds of thousands of women estimated to have been raped in about a hundred days. Thousands of them were forced then to bear the children of their rapists."

Wolfe studies and catalogs stories like these for Women Under Siege, a Women's Media Center project. Through education, the group hopes to put an end to sexual violence in conflict. Rape, Wolfe says, can be a tool of genocide, one where pregnancy is the goal. That's why, despite his subsequent apology, Congressman Akin's initial statements troubled her:

[2:58] "Casting doubt on these stories or putting them in categories such as legitimate and not legitimate or saying that a body should have taken care of an act of violence, a body should have rejected it is incredibly harmful. We are doing everything we can to try get these stories told so that we can learn from them so that we can stop this and anything that sets that back is really very painful."

Still, Wolfe is hopeful that these comments might provide an opening for understanding and for healing:

[3:26] "By getting a chance to put such misconceptions in the spotlight we actually have the chance to refute it and educate people who don't know. I almost welcome this as a chance to set things straight."