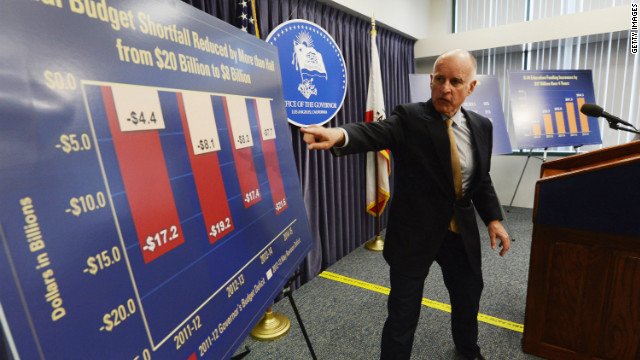 (CNN) - Earlier this month, presidential candidate Mitt Romney half-jokingly made a comparison of California’s economic situation to that of Greece.

While the comment angered some California Democrats, Shoshanna Grossbard, an economics professor at San Diego State University, says California is not Greece, but the situation is pretty gloomy.

It’s not just California’s nearly $16 billion deficit, or the nearly 11-percent unemployment rate, the down housing market and high foreclosure rate, or the poorest credit rating in the nation.

Grossbard says it’s also demographics. Specifically one big one that is affecting the economies of states, the U.S. as a whole, and other nations: baby boomers.

[3:07] “Now all these baby boomers…are reaching retirement age. And they are becoming more of a burden on the economy. They need to get their pensions, they’re not saving any more, they’re not contributing as much any more to the revenues but they are taking money out.”

Three California cities already have declared bankruptcy this summer. And credit ratings firm Moody's says it plans to review the finances of more municipalities in the state as it sees an increased risk for default.

Do you live in California? How has the economy affected you? Let us know in the comment section below.