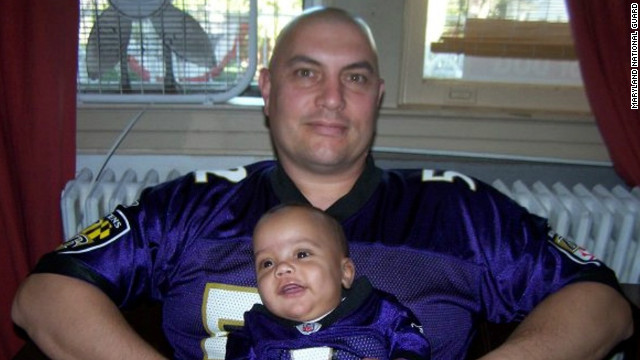 Maj. Robert Marchanti, with his grandson. Marchanti was killed in February by an Afghan police officer who was trained by U.S. troops.
August 24th, 2012
11:20 AM ET

The attack happened inside a secure building in the Afghan Ministry of the Interior, days after NATO troops burned copies of the Quran by mistake.

Fellow Guardsman Charles Taylor knew Bob Marchanti, and he trained with him.

[1:58] "I knew him before I was training with him, and I got to know him pretty well. So maybe, maybe, you know, the fact that something hit so close to home comes the realization that, it could be anybody. Could be you. So..."

Of course, in war, it could always be you. That's war.

It's the third time Taylor's been in a combat situation. He was part of Operation Desert Storm, and he also served in the U.S. war with Iraq.

So he knows the drill about getting ready to leave. But this time, Taylor's done something in preparation to leave that he hasn't done before. He sat down with his wife – they've been married for 17 years – and he told her what to expect – if something happens to HIM.

[:43] "I explained to her and said, 'if I come back through Dover Delaware, that in the morning, there'll be two soldiers dressed in uniform – they'll probably wait down the road. I showed her where they'll probably wait, and they'll wait for lights to come on in the house. And they will tell her that I'm gone."

Listen to the full story in the player above and join the conversation below.