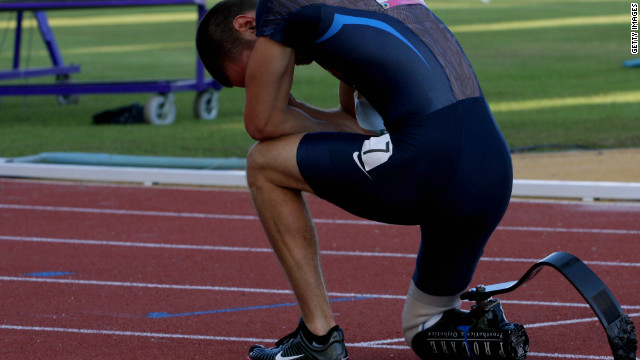 (CNN) - More than 4,200 disabled athletes have gathered in London for the Paralympic Games, which opened this week. The Games are becoming more popular, as 2.5 million tickets were sold to Paralympic events.

But, there’s more to the competition than just the athletes going head-to-head on the playing field. The cutting-edge equipment they use is on display and in its own contest – a competition between companies.

[:34] "It’s exciting, but it’s also stressful because we’ve produced something that we hope is going to carry him down the track, as fast as humanly possible."

Wallace is a 22-year-old Paralympian who will run on a right leg made from components from four different companies from around the globe. Schulte's aligns and puts it all together.

The Paralympics serve as a type of ‘proving ground’ for prosthetics and other disabled sports equipment.

ProCare's VP of Business Development Steve Ehretsman says a good performance by Wallace can bring an uptick in business from other athletes, and all of whom arr disabled.

[1:51] "Yes, I would say that’s one of the reasons why we’re kind of putting our own advertising...our own branding on the devices so when Jarryd’s crossing the finish line that they’re seeing what device helped Jarryd do that."