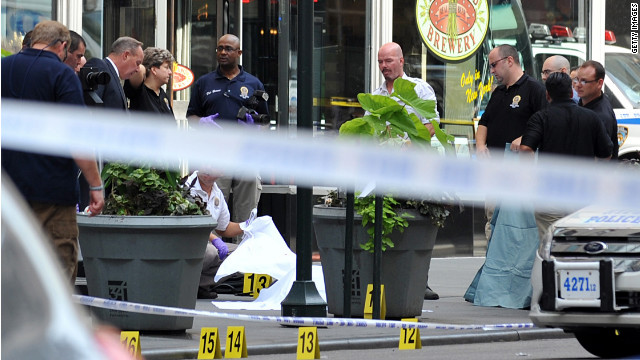 (CNN) – In a flash, a gunman was killed on a busy sidewalk outside the Empire State Building. During the course of last week's shooting, nine innocent bystanders were wounded by two police officers.

When police make the decision to shoot someone, extensive training is supposed to kick in like muscle memory. After an incident like this though, police are often criticized as being too anxious to reach for their guns.

John Jay College of Criminal Justice professor, Eugene O’Donnell, says their actions are often questioned. In this case he says:

[1:15] “There’s no safe way to have a shooting on 34th Street and 5th Avenue because no matter how well trained police are, armed confrontations are always risky, always dangerous.”

So it was shoot or potentially be shot. Still, there are  rules to abide by.

Former New York City police sergeant, John Negus, says with a shooting there is a lot to think about in a very small amount of time:

[3:34] “You’re always taught if you’re going to take your gun out, what are the circumstances, what’s the justification, can you get involved, what are you going to do? But when somebody pulls out a gun, it’s self-preservation. What happens is you have a physiological reaction. You’re probably going to get an adrenalin dump. So you are a little bit panicky. And they always tell you try to get off the X, try to move for cover.”

New York’s mayor and police commissioner say it was a justified use of deadly force. Ultimately, a Manhattan grand jury will make that determination.