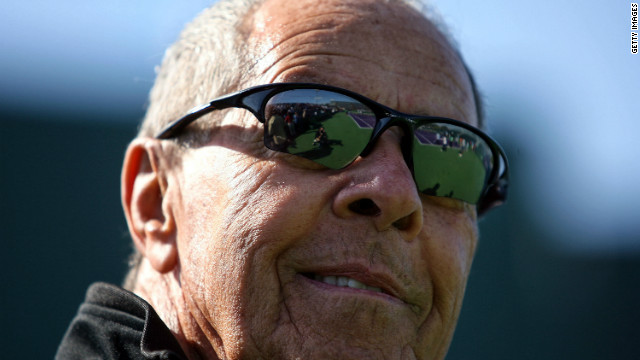 (CNN) - Sometimes to get a fresh perspective it’s best to turn to somebody old.

That’s what we’ve done for this story on one of the biggest controversies over how to teach children tennis.

With the U.S. Open Tennis Tournament in full swing, we’ve turned to Nick Bollettieri. His tennis academy in Florida has turned out some of the sport’s greatest players over the past 60 years.

Now, we wouldn’t turn to Bollettieri for marriage advice. At the age of 81, he’s married to his eighth wife. And in this interview, he acknowledges why.

We turned to him because parents all over the country, whose young children are in tennis clinics, are starting to see something new. A different type of tennis ball. It’s a different color. And, most importantly, it doesn’t bounce as high as a regular ball. So it’s easier to hit. And it’s used on a smaller court. Is that the way to train a champ? A lot of coaches and parents don’t think so.

But the U.S. Tennis Association does. And it has mandated that all its tournaments for children 10 and under be played with these softer lower bouncing balls. They call it the QuickStart method, or 10 and Under tennis.

You want to see a parent who thinks their kid’s got real potential get agitated? Go to a 10-and-under tournament where they’re told their kid has to play with what one coach derogatorily called "these nerf balls."

Now, when the USTA officials tried to sell Nick Bollettieri on this new system, he says he practically kicked them out. And then, as he tells us in this podcast, his thinking evolved:

[6:20] "What we must remember is that the youth of today must have confidence, not only in striking the ball but if they have a little success in whatever they do, they'll come back. 10 and Under tennis gives you a darn good chance to make contact with the ball, have fun, and go home and tell your parents, 'I had a great day.' "

He also tells us what he looks for in a young tennis player – how to spot potential.

He teaches us about the critical new role of pure brute strength and physique in men’s and women’s tennis.

And he tells us one thing you might never have noticed – about the new spot all players must position themselves on the court for their ground strokes – whether it’s the U.S. Open or any other tournament.

Listen to Nick Bollettieri. An old man with boundless energy and fresh eyes.