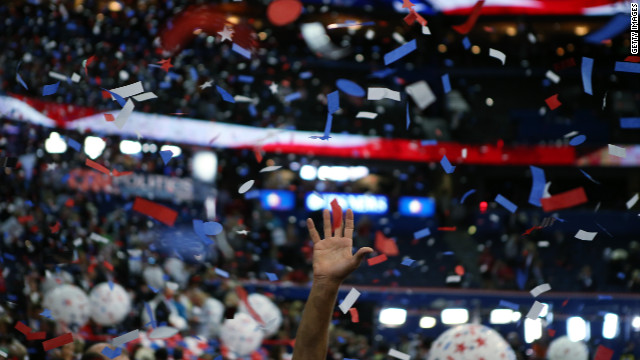 Attendees celebrate as confetti and balloons drop to mark the end of the 2012 Republican National Convention.
September 2nd, 2012
07:00 AM ET

(CNN) – The Republican National Convention is over and the Democrats' convention is about to get underway.

If you're feeling the fever like we are, you've spent the last week glued to your computer, radio, and television (or all three at once, if you're hardcore) to get the latest from Tampa.

A lot of great media outlets did a lot of great work, so in this week's Sunday Playlist we're listing some of our favorite convention-inspired audio pieces from the last week.

So without further preamble, we give a fond tip-of-our-hat to:

From the great public radio program "The Takeaway," comes this detailed look at what it takes to give an effective speech at a political convention (take notes, in case you plan on giving one).

At the height of his power, William Jennings Bryan was one of the most influential politicians of his era. From the podium of the 1896 Democratic National Convention, he delivered his historic "Cross of Gold" speech. It's considered by many to be one of the greatest speeches ever delivered in American politics. Radio Diaries has the inside story.

Every political convention is a part of America's political history. How does the 2012 RNC compare with its peers? Political analysts Mark Shields and David Brooks joined Newshour's Gwen Ifill and Judy Woodruff to put the convention in its historical place.