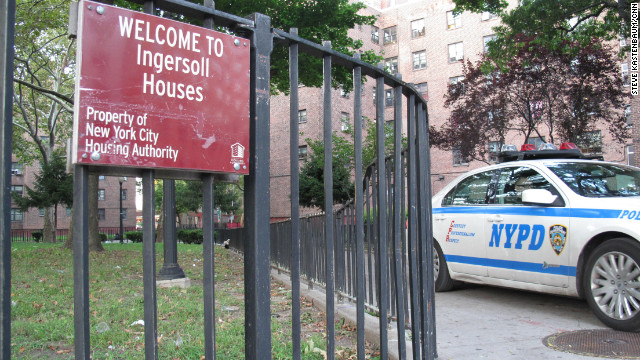 The Ingersoll and Whitman public housing projects in Brooklyn, NY make up one of the poorest communities in the United States.
September 13th, 2012
06:00 AM ET

Visiting the poorest of the poor

(CNN) – One in seven Americans is living at or below the poverty line.

A report released by the Census bureau on Wednesday showed that the poverty rate in 2011 was 15 percent – unchanged from the previous year.

The number of people living in poverty in the US was 46.2 million.

As one of the poorest census tracts in America, the Ingersoll/Whitman Houses in the Fort Greene section of Brooklyn, NY gives those numbers a wrenching face.

He looks at the gleaming new office towers in nearby downtown Brooklyn and wonders why things haven’t improved at this public housing project.

[1:34] “You put up all these developments; they don’t hire no one for working. Can’t be carpenters, can’t be nothing. And I’m OSHA certified, certificates out the kazoo… They won’t hire you, won’t hire you.”

The report also shows that income inequality grew last year by 1.5 percent. Aurora Zepeda of the Institute for Children, Poverty and Homelessness pored over the new data.

[2:39] “What I see is that the typical American family is struggling and that wages are not rising and that everything that it costs to keep a family together is going up. And thus, the value of someone’s wages or salary is essentially eroding.”

Advocates like Zepeda say the report shows that the sluggish economy continues to drag down the poor, while programs meant to give them a leg up have been fading away.