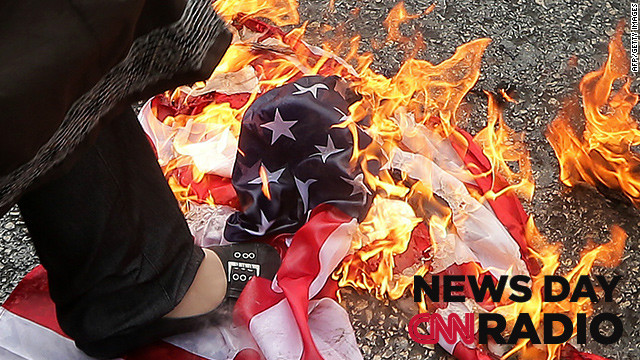 One of thousands of demonstrators in Lebanon stomps on a burning U.S. flag in continuing protests over an anti-Islam film.
September 21st, 2012
04:30 PM ET

[3:55] "What we saw was not so much a spontaneous outpouring of rage as a very carefully manufactured outpouring."

[7:45] "...I want to emphasize Medicare and Social Security are not handouts. You've paid into these programs your whole life. You've earned them."

[8:11] "The first step to a stronger Medicare is to repeal Obamacare because it represents the worst of both worlds",  said Ryan to a mixed response from the crowd.

[12:25] "I normally replace every year. I have to – everything. Sometimes twice a year ..." says 31-year-old Raymond Fulton who talked to CNN's Edgar Treiguts about his tech buying habits.