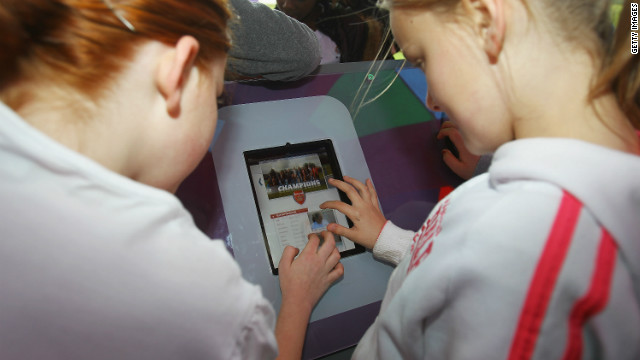 Many experts say parents should be vigilant in how their kids use any screen.
September 24th, 2012
04:19 PM ET

(CNN) – For years, experts have been urging moms and dads to limit the amount of television their kids watch. Most parents will agree that's a difficult task. Now, with the arrival of the mobile age, parents are being told to monitor all screens at all times.

[:49] "You know it can be the only thing that they seem to want to do. And I think that it does take more time and energy to try to get them engaged in something else," says Lauren Sanders, a mother of two.

A lot of TV shows for children can be fun and educational, but they only require passive attention. So what about exposure to more interactive media devices like tablet computers or smart phones?

Dr. Nancy Darling is a professor of psychology at Oberlin College. She recently wrote an article for Psychology Today on whether toddlers should she be allowed to play with iPads. Darling says touch-screen devices can be fun to play with, but they're far from the perfect learning tool:

[2:38] "It's a cool toy but it's a very impoverished environment. It doesn't smell. It doesn't have textures. It only moves in very specific, predictable ways. So it's actually a much less rich environment than other kinds of toys that they have."

However, many parents believe it's important to expose children to the latest in electronic gadgetry:

[4:05] "It's kind of the reality that this generation is growing up with these sort of devices . . . If they're not exposed to this sort of thing then they're at some risk of being left behind it," says columnist Brad Moon who writes the GeekDad blog for Wired.com.

Should children be given mobile devices early in life? Listen to the complete story above and join the conversation below.