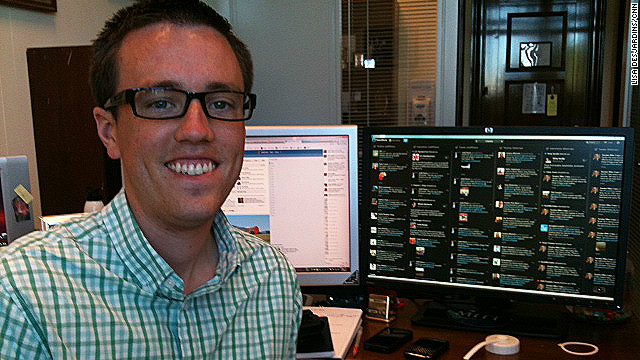 (CNN) – As members of Congress fight for their jobs and face a near pitchfork-level of anger from voters, deep inside Capitol Hill offices, dozens of 20 and 30-somethings are trying to make things better from their keyboards.

Deere was hired to help Crapo's office to get a larger presence in social media. Nonetheless, he encountered some resistance over whether the instant-reaction platforms would be good for the senator.

But Deere insisted that any member of Congress who is not vigorously using social media ultimately won't remain in office:

[7:10] "If you're not on Facebook or Twitter, you don't get your message to a group of people that is even starting with my parents age now. There's a section of people who you're not reaching. At all."

The challenge is bringing the 223-year-old institution, which always has interacted with voters through handshake stops and news reports, into a world where the personal, casual and one-on-one dominates.

So far, the ability-to-adapt gap is wide.

Many in Congress still send tweets with an "official" tone to them, and a large group of them don't even tweet themselves.

Only a minority engage one-on-one with voters regularly over social media. However, some experts point out, this is the learning curve.

[4:17] "It's interesting because we expect these people to be experts in something that is roughly 5 years old, you know," said David Almacy, who was the White House internet and e-communications director under President George W. Bush and is now a senior vice president at the Edelman public relations firm.

He points out that when he was in the White House, the digital guys were often the last to be looped into a project. Now, new media staffers like Judd Deere are some of the first players a lawmaker looks to when seeking to communicate a message.

Slowly though, it seems the social media push in Washington is part of a larger change, a change in the way government and politicians communicate.

[3:29] "In a way, the whole culture, exemplified by government, is moving toward this more conversational aspect of deliberation, of interaction...it is a little bit more human but it's inviting more people into the process. In some sense it's just broadening the base of the conversation as well as changing the human tone of the conversation," said Lee Rainie who directs the Pew Research Center's Internet and American Life Project.