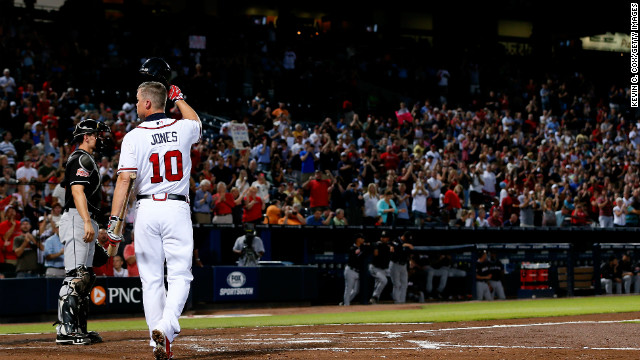 Chipper Jones of the Atlanta Braves waves to the fans during a standing ovation as he steps to the plate at Turner Field.
September 28th, 2012
11:11 AM ET

(CNN) – Very few pro athletes are afforded the type of farewell sendoff that Atlanta Braves' veteran third baseman Chipper Jones has been getting this season, his 19th in the major leagues.

Not only has he been feeling the love from his hometown fans, but also those in opposing cities.

[:26] "The gifts and the ovations have just been at times really overwhelming. Certainly unexpected."

It's respect for a player who has Hall of Fame-worthy credentials.

He's played the game the right way and honored its history. That combination means more than anything to baseball fans – whether its your own team's player or not.

Jones is an 8-time All-Star, an MVP award winner, and was an integral part of the Braves' record run of success that included 14 straight division titles and a 1995 World Series championship.

His statistics put him squarely in the conversation of the greatest switch hitters ever to play the game, alongside the name of Mickey Mantle, his idol.

He's been the face of the Braves franchise on the field, and will retire having played his entire career for only one team – a rarity in the game today.

Jones final season will end with a little extra action.

The Braves have clinched a playoff berth, so he'll get one more taste of the postseason, beginning October 5th.