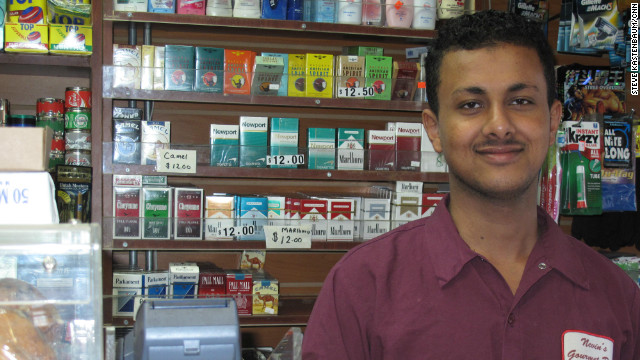 Sammy Kadassi emigrated to the US from Yemen. His ideas about freedom evolved after the move.
September 28th, 2012
12:56 PM ET

My freedom vs. your freedom

(CNN) – Freedom of speech, freedom of religion, freedom of the press… these ideas are at the core of the American perception of freedom.

President Barack Obama told the United Nations General Assembly this week that promoting those freedoms around the world is the key to peace.

However, perceptions of what freedom actually is differs from culture to culture.

Arch Puddington is in charge of research at Freedom House, a non-profit organization that reports on the state of freedom around the world. He defines freedom as being the right to be free of over-intrusion by the state.

[1:26] “If you don’t have rule of law you’re going to have a state where everyone can be mistreated, can be jailed, can be tortured, because the state has complete domination over the institutions of law.”

Sammy Kadassi came to the US from Yemen, a country where the US is pushing for democratic reforms. Kadassi says in his country freedom came through religious authorities, not the government.

[3:26] “The freedom in my country is different because we have over there the religion and the tradition covers everything over there,” said Kadassi

Tom Palmer used to smuggle literature about freedom and democracy into former Soviet Union nations and other totalitarian states.

Today, he studies and lectures about individual liberties and limited government as a senior fellow at the CATO Institute, a public policy think tank in Washington D.C. Palmer says freedom isn’t something achievable just by holding elections.

[1:57] “People think about democratic freedom and they think, oh we go to the voting the booth and we vote. But what happens to the people who get elected? Do they have unlimited arbitrary power or are their powers limited by law, law that protects the rights of all citizens regardless of race or religion or creed or color or other accidental features.”

In the end, Palmer says different perceptions of freedom have a common thread at their core: individual responsibility.