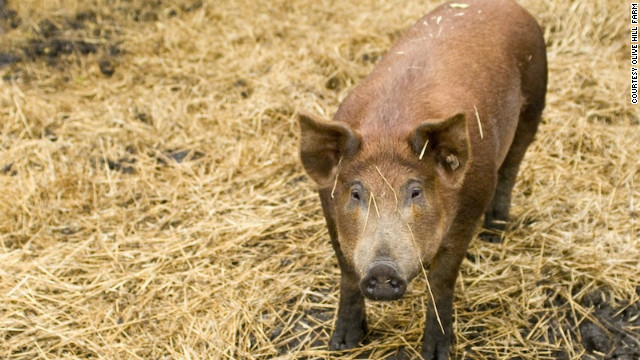 The high cost of raising hogs is causing a bacon shortage and higher bacon prices.
October 1st, 2012
09:34 AM ET

Though the industry warning first came out of Europe, hog farmer Diana Prichard of Michigan’s Olive Hill Farm says that it’s true here in the U.S. too.

There are three factors contributing to the impending shortage. According to Prichard, the first is the drought:

[1:24] “Most of the corn and soy beans, which are the two major crops that we use to feed hogs have been damaged or some of them lost entirely this year.”

Then, says Prichard, there are the new renewable fuel standards set by the federal government:

[1:51] “The ethanol mandates have ethanol plants buying an increasing amount of corn each year to produce ethanol to go into our fuel and so the less corn there is on the market.”

The third factor is a worldwide call for more humane standards for raising pigs and other livestock:

Kat Kinsman, managing editor of CNN’s Eatocracy, says it’s about the sanitation standards of the animals and humans on farms.

Too often food is contaminated because of the lack of clean facilities and sanitary workers.

Prichard and Kinsman said you probably won't  find grocery store shelves barren of bacon, but there may soon be less of it and at higher prices.

Are you a bacon lover? Are you concerned about a bacon shortage? Do you have a favorite bacon recipe or dish?

Listen to the full story above and join the conversation below.