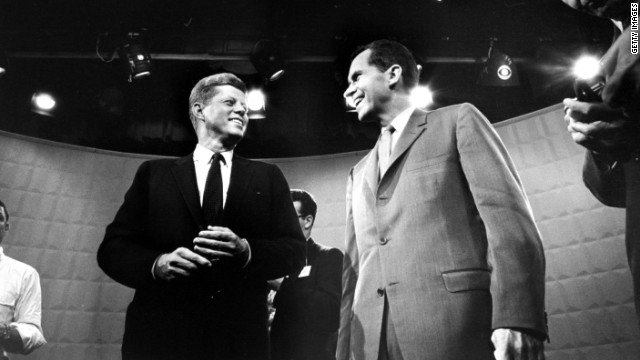 OPINION: The past debates that never happened

(CNN) – CNN Contributor Bob Greene says although presidential debates are now a big part of politics, that wasn't always the case. It took a while for the process to catch on after the first debate in 1960.

[1:47] "Kennedy vs. Nixon was the first– and for a while it seemed it would be the only.  In 1964, President Lyndon Johnson, well ahead in the polls, decided that there was no good reason for him to debate.  He sent word to his Republican opponent, Barry Goldwater, that he would not be participating.  And he didn't."

[2:35] "It wasn't until 1976 that President Gerald Ford broke the lull– he debated his challenger, Jimmy Carter.  Since then, every election year, the candidates have debated.  A candidate would be seen as chicken for not showing up."