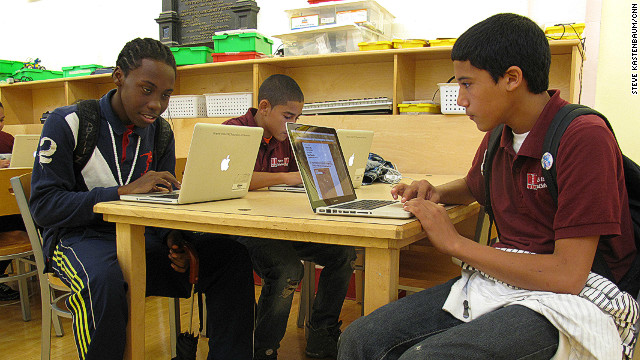 Students at the Island School on Manhattan's Lower East Side go from being digital consumers to content creators at the middle school's tech café.
October 5th, 2012
10:27 AM ET

Editor's note: This story is part of the CNN series, "Our Mobile Society," about how smartphones and tablets have changed the way we live. Listen to the complete story in the audio player above.

(CNN) – Middle school students at the tech café inside the Island School on New York’s Lower East Side have their laptops open.

They’re working on their next blog posts about current social issues under the guidance of their teacher, Lou Lahana.

He’s on a mission to help these kids go from being consumers of digital products to being content creators – to end ‘digital inequality.’

[3:01] “They’re creating a whole bunch of media in various forms. They talk about digital fluency. What, to me, that means is that you’re fluent in a wide range of technologies. You don’t just do film making. You don’t just do programming. You do whatever tool makes sense to express yourself and what you are interested in.”

Education experts say when you compare children from low-income households to their peers in better off communities, you find that they have similar levels of access to today's digital technology.

The so-called digital divide has all but disappeared.

But there’s a huge gap in knowledge of how to use that technology.

Northwestern University professor Eszter Hargittai believes that bridging the gap is the key to creating a path out of poverty for students.

[5:47] “If we have classrooms where we actually paid attention to these things then we can teach children to get better… so that they could actually catch up.”

At the Island School’s tech café, 13 year old Ray Rivera is making big strides in catching up. He’s learned how to write code, how to create videos and digital music, and he’s learned how to use the internet to broaden his knowledge base.