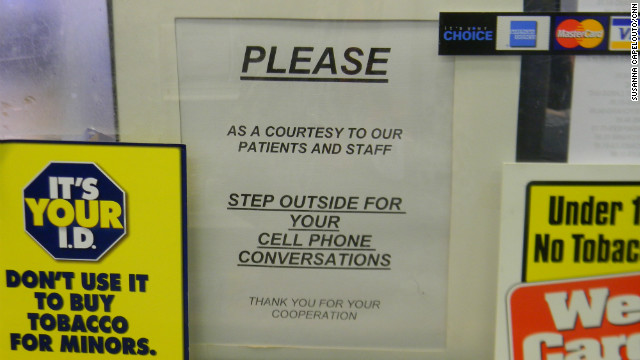 Customers consistently ignore this sign at a store in Atlanta and clerks are reluctant to enforce it.
October 5th, 2012
01:57 PM ET

Editor's note: This story is part of the CNN series, "Our Mobile Society," about how smartphones and tablets have changed the way we live. Listen to the complete story in the audio player above.

(CNN) – Have you ever wondered what the clerk behind the register really thinks when you talk on your cell phone while trying to pay?

[:23] “I've had someone holding up the line because I kept trying to tell them what to do on the credit card prompt machine and they kept canceling their transaction. and we do it 3 times and the line keeps getting longer,” says Ya’Al who works at a pharmacy in Atlanta.

She says when people prefer to talk on the phone rather than interact with her, it makes her feel ignored as a person.

She’s tempted to say something, but customer service always trumps her feelings.

Her co-worker Cheryl Lesner has found a way to deal with cell phone talkers.

[2:14] “I feel I can't be rude to people . I have talked really loud to people so they have no choice but to pay attention to me, but that's as far as I usually go.”

People are not able to be in two places at once and that’s essential what they’re doing says Scott Campbell, a communications professor at the University of Michigan who studies cell phone use.

[1:03] “When we're on the cell phone we might be occupying one physical space, but we are actually occupying two social spaces. So we're juggling those 2 social spaces and we become consumed by one of those spaces and when you're on the phone that's where the attention gets directed.”

And we ignore the people right in front of us.

It’s a phenomenon sociologists have coined “absent presence” and it’s expected to grow as our mobile devices beckon us to be available to our social network any time, anywhere.