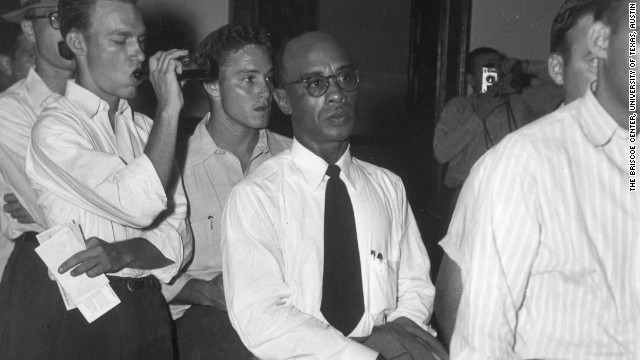 The price for diversity

(CNN) - One of the people attending the Supreme Court arguments in the affirmative action case, Fisher v. University of Texas, is the daughter of Heman Sweatt.

Sweatt was an African American postal worker from Houston who sued the state of Texas to attend the law school at the University of Texas at Austin – in 1946.

After four years of fighting in the courts, with Thurgood Marshall as Sweatt's lawyer, the Supreme Court ordered the law school to admit Sweatt. It was the first time the Court held that, diversity, in and of itself, was a value in education.

Sweatt didn’t talk about the case to his daughter, Mellie Sweatt-Duplechan, who was born in 1964.

Only in recent years, when author Gary Lavergne wrote a book about her father’s case, did she learn what he went through to open that door. She learned he had faced death threats and bomb threats at his home.

Gary Lavergne says, when Sweatt entered the University of Texas:

[2:41] "He had to face the hate speech and the not-so-veiled threats against him. There was a cross burning on the campus of the University of Texas – scrawled on sidewalks everywhere were the letters KKK."

Lavergne says Heman Sweatt dealt with many more pressures and that he paid a price for the principle of diversity that his case stands for.

His daughter says she understands her father better now that she has learned the truth. She wishes he were here so she could ease the darkness she believes he felt in silence.