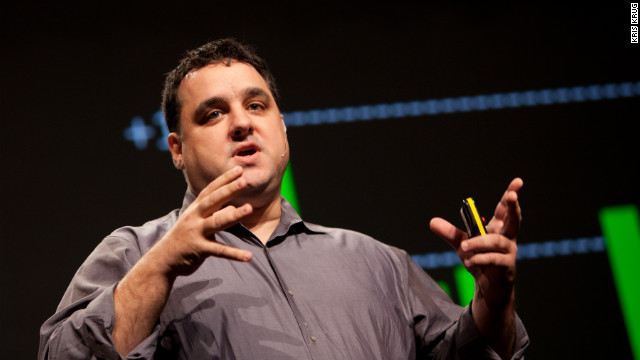 (CNN) - Within an hour of arriving as a freshman at Vassar College in the 1980s, Andrew Zolli met a woman. They clicked. But this CNN Profile is not a love story. It’s a story about what you can accomplish when you choose a life mission that fits you.

“My whole life I’ve been interested in hybrids. What happens when one field or discipline rubs up against another. How different fields of practice inform one another” to address “the same problem or set of concerns.”

Zolli had been pursuing a doctorate in cognitive neuroscience – or brain science. He was ready for an academic career. “I owned one suit with leather elbow patches.” Then he got involved in the internet when it was in its early stages of development.

But then he took some time off. And, as it often does, serendipity entered the picture. And Zolli wound up doing work for a young non profit called Pop Tech in late 2002.

Pop Tech just happens to do what Zolli has always been attracted to. It figures out what happens when, as he put it earlier, “one field or discipline rubs up against another.”

In the case of Pop Tech – they don’t wait for accidental rubbing. As Zolli describes it, they bring together “a network of scientists, technologists, engineers, designers, corporate and civic leaders, innovators.” Not to ponder. To collaborate. Their goal – to achieve “breakthrough approaches to some of the world’s toughest challenges.”

In the coming week, at their annual gathering in Maine, The Pop Tech mix will be trying to develop original approaches to making our institutions and ourselves more resilient – more able to bounce back when we get knocked down.

Zolli travelled more than one hundred thousand miles around the world looking for the principles underlying resilience– and wrote a book about it which we’ll focus on in this edition of CNN Profiles. So if you want some insight into the power of bouncing back, please listen.

As for the woman Andrew Zolli met 24 years ago during his first hour as a student at Vassar – they are married. And Zolli is a father. Which means he must know something about resilience.