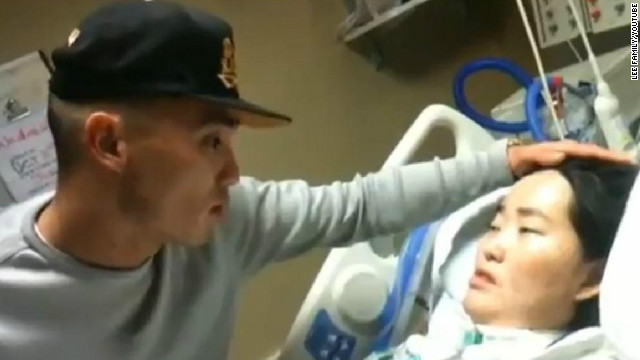 In a screen grab from a video uploaded to YouTube by Grace Sung Eun Lee's family, the 28 year old with brain cancer signs over medical proxy to her father reversing a decision to turn off life-supporting machines.
October 11th, 2012
11:52 AM ET

Letting death happen, is it suicide?

The once vibrant, athletic woman is now kept alive by machines which she wanted to turn off. However, her devoutly religious parents  convinced her that she was effectively committing suicide, and that she would be condemned to hell.

So she changed her mindArthur Caplan, director of medical ethics at the NYU Langone Medical Center said the story is the latest illustration of the sensitive debate over end of life care as it intersects with faith.

[2:30] “Of course you have to wonder if you are being kept alive by machines where’s God’s hand in that and that doesn’t get a great answer in my view theologically. But once started, I don’t think stopping a machine is necessarily suicide even if you know it’s going to lead to your death because the fact is for terminally ill people, they’re going to die.”

Dr. Dan Sulmasy from the University of Chicago spent 28 years of his life as a Franciscan Friar. He says,

[6:06] “There’s no actual philosophical or theological definition of suicide in the scriptures. Let me say that for mainstream Christian religions, they all draw a distinction between killing and allowing to die.”

Grace Lee’s father is a minister at an Evangelical Korean-American church in Queens, NY. He thinks a miracle has already taken place.

[7:27] “I believe this woman will do her best when she gets better and she will continue God’s work. She’s getting better every single day.”

Doctors say moving her to a nursing home and keeping the machines on is only prolonging her death.