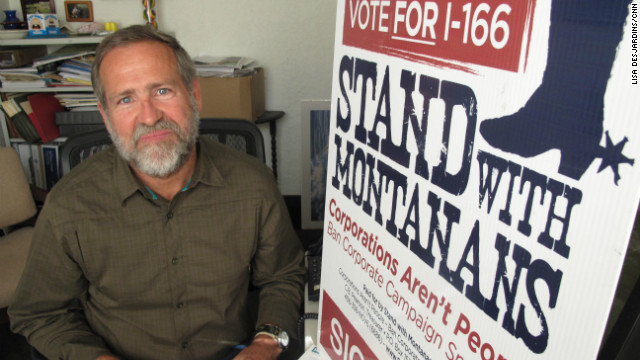 C.B. Pearson and the group, "Stand With Montanans," are pushing to keep the state's campaign finance laws as others fight just as hard against them.
October 12th, 2012
10:00 AM ET

Missoula, Montana (CNN) -– As the nation wrestles over who will occupy the White House for the next four years, Montana is in the midst of a fierce battle over 100 years worth of campaign finance law. And what happens in the Treasure State could set the tone for the future of campaign funding around the country.

On Election Day, voters in Montana will decide on a ballot initiative that would direct each of their elected officials to push for an amendment to the U.S. Constitution. The amendment would allow states to ban corporate funding of campaigns and set sharp limits on the money individuals can donate to candidates.

It is a test of government control over campaign spending versus corporate influence over candidates.

For a century, Montana has had some of the toughest limits on campaign funding in the country. That has its origins in the 19th century when copper barons openly bought politicians and ran mining operations that left pollution and scars across the state. Outcries led to sweeping reform, including a ban on corporations funding campaigns in the state.

That ban was overturned 100 years later, in June, when the U.S. Supreme Court ruled that Montana’s law limited free speech rights of corporations, pointing to the court’s earlier decision in Citizens United.

Now a group called “Stand with Montanans” fears that, without a Constitutional amendment, well-heeled mining corporations can again take over the state’s government.

[4:24] “We're never going to be able to compete in that arena with the corporations. They have so much money, they can buy political outcomes in elections like they buy lumber or they buy other sorts of merchandise.”

On the other side, an advocacy group named the American Tradition Partnership, is campaigning against the ballot initiative and has launched sweeping lawsuits against most of Montana’s campaign finance laws. The group lists its mission as fighting “extreme environmentalists” and pushing for natural resource development. But it does not disclose its sponsors.

[5:52] “The assertion that people are trying to buy elections or buy politicians is absurd. As American citizens we retain the right to case our ballots for who we want. No corporation or third-party group can control who we vote for.”

Listen to our story for more on the American Tradition Partnership and its arguments as well as the potential environmental fears of their opponents.