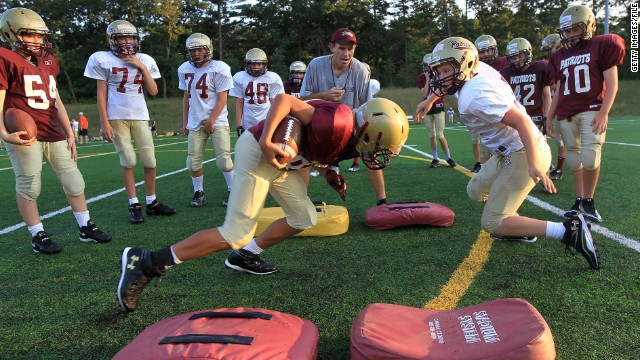 The number of concussions in youth football has prompted a school board in New Hampshire to consider a ban of the sport.
October 15th, 2012
12:55 PM ET

Should youth football be banned?

(CNN) – The growing number of concussions in football has prompted a proposal to ban high school football in Dover, New Hampshire.

Dr. Paul Butler, a retired surgeon and Dover school board, member said he’s concerned about the repeated head trauma, both detected and undetected, that some younger football players suffer.

[1:29] “Football is the only game we have right now, in my opinion, that uses the head as a battering ram repeatedly during a given game or a given practice session.”

He said, since 2002, studies on the long-term effects of concussions suggest football is simply too violent a sport, especially for kids.

Concussions are plaguing the pros too.  It's currently one of the most hotly-discussed topics in the NFL.

According to the NFL Concussion Report, operated by the independently-run “Concussion Blog,” there have been 51 concussions so far in 2012's six-week-old NFL-season.