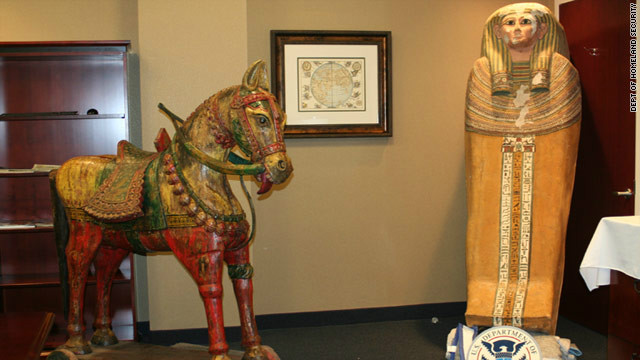 A statue of a horse and an Egyptian sarcophagus are amongst the $2.5 million worth of antiquities tied the New York smuggling ring Mousa Khouli has been convicted of operating.
October 18th, 2012
02:00 PM ET

(CNN) – Next time you walk into an ancient art museum, think about this:

[1:12] “A surprising number of objects on display at local museums near you passed through this black market at some point.”

Jason Felch is the brains behind a new project called Wikiloot, and the black market he’s talking about is a complicated network of excavators, thieves, smugglers and middle men who have been supplying ancient art to museums and collectors around the world for decades.

[1:36] “I think the problem is far greater than the general public understands and far greater than most museum officials are willing to admit. It is the exception to find an ancient object in an American museum that has a crystal clear ownership path going back several decades.”

Wikiloot is Felch’s attempt to consolidate information that governments from around the world have gathered, and enter it all into a central database.

Once all that data is in the system, Wikiloot would use crowd-sourcing to help track valuable relics down and prevent them from being sold on the black market.

[6:11] “What has happened is in the past really 10 years authorities, particularly in Italy but also in Greece and elsewhere, have raided the key middlemen of this network of dealers and uncovered tens of thousands of records including photographs of recently looted objects. So what we’re proposing to do with Wikiloot is to take a lot of these primary source documents of the illicit trade and to put them online into a web platform that will allow collaborative research and collaborative work to track down what these objects are, where they are today and how they are connected to the various dealers and middle men and looters who we’re beginning to learn more about.”

Felch hopes Wikiloot can help turn the sordid past of American museums and private collectors into a future of collaborative learning and partnership between nations.