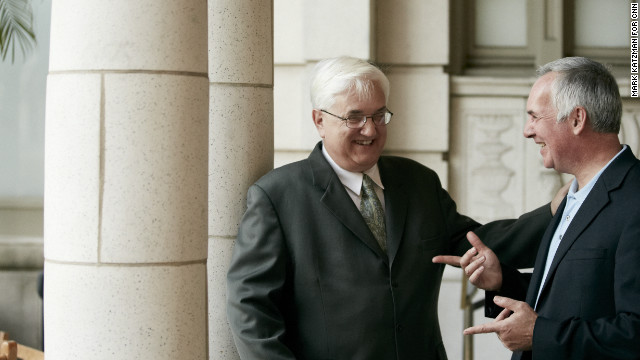 Whistleblower Jim Holzrichter with Richard Zott, the former federal agent who worked on his case.
October 25th, 2012
08:59 AM ET

In war against fraud, whistleblowers on front lines

(CNN) - Whistleblowers are a hot item these days as new programs aimed at reducing fraud on Wall Street are up and running.

They’re building on a long tradition of laws that let people call out corporate wrongdoing and get rewarded for it.

But while some people win big, a lot of people pay a bigger price for doing good.

Jim Holzrichter’s story would cause many to ask: Who would do such a thing to themselves and their family? Why would anyone stick out his neck and go through hell to call out wrongdoing?

One reason Holzrichter blew the whistle on his employer, Northrop Grumman, is that he had to. Federal agent Richard Zott came to his house one day, after Holzrichter had been finding irregularities in Northrop’s parts and materials inventories. Zott had heard about it and said he wanted to talk.

[5:35] “I told him that if he had information and he wasn’t going be cooperative, that I would be coming to see him the next time with handcuffs.”

But it came to be Holzrichter’s life for the next 17 years. He lived through the stuff of a Hollywood thriller – through things Zott says “he would not wish on anyone.” Today, Holzrichter mentors OTHER whistleblowers – while they go through some of what HE did.

[11:33] “It comes back to me what my father said,” Holzrichter says. “When is it ever wrong to do the right thing? It’s not easy. But there are those who just have that ethical compass – who don’t allow themselves to walk away when they see something’s wrong.”